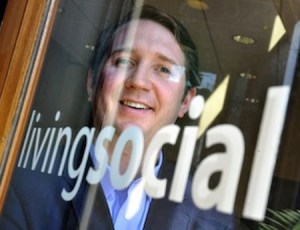 In April, LivingSocial raised $565 million, making it look like the Groupon runner-up might be heading toward an IPO. According to Reuters, this is even more likely given that the daily deals site is meeting with banks to help advise going public and could pick its lead underwriting banks by Friday. The company could find itself valued at as much as $10-$15 billion.

LivingSocial has played second fiddle to Groupon since the two took over the coupon curator landscape, but has lately been hot on the heels of its competitor. Groupon recently filed IPO, and has since struggled to prove its worth to investors. LivingSocial, on the other hand, has been welcoming nothing but positive press, which likely hasn’t hurt its skyrocketing valuation. Still, Groupon maintains a significant lead over its competitors, its sales accounting for nearly half of all those in the market. Whether or not the “bad investment” warnings affect its performance remains to be seen, although it’s managed to remain a powerhouse despite the bad press.

And regardless of Groupon’s own IPO progress, LivingSocial has enjoyed a quick ride to becoming far-and-away the number two daily deals site. It’s also expected to continue performing well next year, and projects that it will see $1 billion in revenue this year which would keep the high cash flow going through 2012. If it’s reported valuation is correct, then LivingSocial won’t be terribly far behind Groupon’s own estimated worth (the site ended up valued around $15-$20 billion).

A Groupon IPO followed shortly by LivingSocial definitely indicates that the daily deals market has taken hold over e-commerce and that a lot of money could be made. Perhaps a larger indication of a LivingSocial IPO, however, is the supposed tech bubble we’re living in. Pandora, Groupon, LinkedIn, Zynga, and reportedly LivingSocial have all decided to shed their private status within the last year, and all have seen some insanely high valuation estimations as well as monumental rounds of fundraising. There’s strong opinion that the tech bubble is responsible for such inflated numbers, saying that while these social-tech sites are insanely popular, they are also operating unproven  business models that people could lose a lot of money investing in (which is cause for much of the Groupon IPO backlash). The reality of a tech bubble is still being questioned, but it’s likely enough to make interested parties take a hard look at investing in a LivingSocial IPO.

CHNL partners with Groupon, LivingSocial to curate more than the social Web