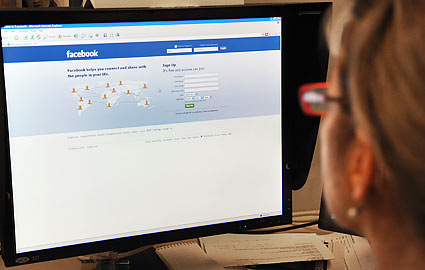 According to a survey by Kaplan test prep, 82 percent of 386 university admissions offices surveyed use Facebook to screen applicants or recruit potential students. It’s not exactly surprising that when it comes to the Internet, nothing is sacred.

Still, it makes us nostalgic for the days when you had to be a real college kid to create a Facebook account. All the immaturity and debauchery within it, while not private, was at least contained. But everything comes to an end, and the era of a being able to post photos of you and yours doing keg stands while under the age of 21 without even the possibility of repercussions is definitely over. And if you’re applying to college, the numbers say you should be taking what’s on your Facebook even more seriously.

We know – it’s exhausting to do anything but select one of Facebook’s prescribed settings. Trust us, your time, effort, and self scrutiny are worth it. So get ready to live and die by the custom settings during your college application process.

[UPDATE: Senior communications manager Russell Schaffer got in touch with us to clarify what that 82 percent actually means. Read his message below.

For starters, it’s generally a good idea to exercise caution when it comes to third party applications. You’re giving up a lot of information (which could very well include your phone number and address in the near future), and you’re also opening yourself up to posting spam. If some sleuth-like recruiter really wants to check out your personal life and gets himself added to your Friends list, constant posts about your Farmville activity don’t really speak to your intellectual capabilities. And if you just can’t cut the stuff out of your Facebook life, be sure to hide your notifications. Nothing quite says unprofessional like “Ashley has a new e-crush!” posts.

Also, be sure to scroll through your Applications every so often. They build up without your noticing, and if you’re in the college application process it’d be smart to whittle them down. Go to your Privacy settings, and then click “Apps and Websites” at the bottom. From there, choose edit, and you can go through everything you’ve ever allowed permissions to. You probably don’t remember why you felt the need to enable the “What’s my celebrity baby name?” app, but it’s certainly not going to impress anyone.

This one’s important, and it’s fairly buried in the enigma that is Facebook’s privacy information. At the bottom of the main privacy page, you’ll again see the “Apps and Websites” title. Click “Edit your settings” and then take a look at “Public search.” Unless you are extremely, unshakably confident that your Facebook profile will in fact help you get into the school of your choice, make sure this is not enabled.

If you don’t believe us, believe Harvard. In a Quora post making the rounds, admissions officer Allison Otis explains. “As an interviewer for Harvard College, I do occasionally Google students I’m interviewing. So that will turn up FB profiles or anything else that is public. As far as I know, we are not given specific instructions to exclude it. I think it is always better to be safe than sorry –when you apply to college you spend such a long time crafting an image through your applications and essays to be careless about your online data is just silly.” Otis also points out that if you want to treat your page professionally, leave it public. Otherwise, close it off.

So, will it influence her decision? She says, “Does a FB profile or a website prejudice me before I meet a candidate? Yes. Absolutely.” If you have public search enabled, your Facebook will be one of the first things to show up. And for all of you out there with cruel parents or “Z” last names, the odds of your profile being the number one page are too good to take the chance.

This particular feature doesn’t have to be a bad thing, it just depends on what type of Internet content you’re consuming. If you comment or Like or Share anything on a site that has Facebook integration, it will show up. So if you make a habit out of commenting on gossip blogs or writing profane comments all over some news site, you may want to disable instant personalization. Say a college admissions officer is perusing the local paper online, only to find that (insert your name here) has written a lengthy, expletive-filled diatribe on how much you despise the American school system. Only so many points can be given out for being politically active, and a lot can be reduced for publicly lambasting an institution you want to be a part of.

We’re not necessarily one(s) to say that putting a clever spin on the name registered to your account isn’t okay. In fact, if you’re past the point of being scrutinized by admission officers, by all means, have at it. But if you’re trying to get into an institution of higher learner, having alternating caps and lowercase characters or your Xbox handle somehow weaved into your actual name isn’t advised. Matthew Isabeast Jones is less than likely to land you a spot.

No strangers allowed! Friends only

A good preliminary step is to visit your privacy settings and switch everything over to Friends Only. Select “Privacy,” and then the “Friends Only” listing. Facebook will show you exactly what you’re keeping from the screens of strangers.

Places is a great feature – as long as you retain control over it. It’s far too easy for your friends to check you into locations you A) might not want to be associated with or B) you could fall subject to some of your friends’ hilarious antics. Don’t worry, you’ll still be able to check yourself in to wherever you like. Hell, start checking in to the library as much as you want and maybe you can use the application to your advantage.

This is the most elementary form of Facebook self-censorship, and something we all do as it stands. If you want to head off being tagged in photos in general, that’s the easiest option. Go to Privacy and select Customize Settings at the bottom, and scroll down to the section titled “Things others share.” You need to edit your settings under “Photos and videos I’m tagged in.” You can either select friends only, or if you want to be excessively safe, choose “Only me.”

If you notice you have Facebook friends that you don’t know, you should also hide your information from them. Same goes for the rest of your settings, but photos can be the most damning. And let’s get real: Go through and untag any depraved photos of yourself. Your 17-year-old self might think shotgunning a PBR looks really cool now, but immortalizing that on Facebook just isn’t worth it.

Topics
How to create multiple profiles for your Facebook account
Is TikTok leaking drafts? Let’s take a closer look at this rumor
What is a Facebook Pixel? Meta’s tracking tool, explained
Meta found over 400 mobile apps ‘designed to steal’ Facebook logins
Elon Musk officially owns Twitter now: a timeline of how we got here
How to use Twitter Advanced Search
Twitter to start charging for verification mark, reports say
Having trouble accessing your Instagram account? You’re not alone
Elon Musk considers bringing Vine back from the dead
Staying on Twitter? Here are two ways to make it easier
Elon Musk now Twitter CEO after firing entire board
Twitter Blue is losing Ad Free Articles and Musk’s latest tweets indicate further changes
Clear Mode on TikTok: Here’s what it is and how to use it