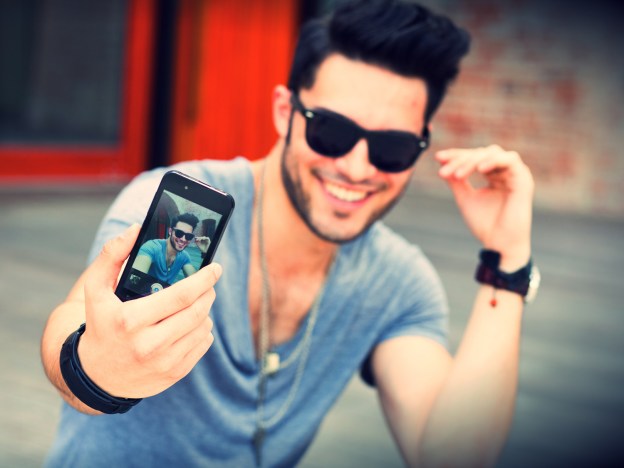 Obvious statement #1: It’s fun to take selfies. I’ve done it. You make yourself look nice, pose at a flattering angle, show the world an attractive picture that you hope compensates for the 145 tagged Facebook photos your friend Kendra left up that show you chugging Miller Lite during your chubby phase. It’s a totally reasonable thing to do (and you don’t need to read a how-to guide to do it).

You know what else is a totally reasonable thing to do? Re-heating leftover ribs and eating them standing over the sink the next day. It’s gross, and no one really wants to see that, but you have fun doing it, and an indulgent, finger-lickin’ chomp session every once in a while won’t harm anyone.

The key words there are “every once in a while.” Just like messily slamming delicious but disgusting food in your mouth is something enjoyable you really shouldn’t do that often, taking frequent selfies is not a good idea. First of all, just like barbecue binges, no one actually wants to look at your selfie-bonanzas. You know who cares the most about your selfies? You! I scroll through my Instagram and basically glaze over my friends’ self-shots. I already know what their faces look like.

The only time I actually process the selfies of others is if there’s something especially tacky about them, and then I think “Wow, how tacky.” Selfies rarely offer any interesting information. They offer up a portrait of the taker that’s obviously been distorted to fit their idea of ideal self. You can see this more obviously when you look at the proto-selfies that still populate the social media graveyard that is MySpace — so many women holding the cameras up and away, embracing the slimming but obviously manipulative angle so frequently that photos at this angle are now called “MySpace shots” and derided. Instagram selfie-abusers are more sophisticated but equally intent on showing their best angle, so it’s rare to get an honest selfie. And that makes them boring.

I’m bringing this up because the Telegraph reported that a recent poll of British people from 18-24 discovered selfies are the most popular genre of photography – in fact, 30 percent of the photos they take are selfies. That means 3 out of every 7 pictures snapped was of themselves, probably pouting. And don’t think this is a teen girl thing – men self-reported as more prolific selfie-takers than women.

Now, this poll is limited to a select demographic of British young people, so it’s not exactly universal – but it’s the Millennial demographic, the first group of people who grew up with the Internet, and social media behavior in the U.K. is generally not all that dissimilar to the U.S. and elsewhere in the world. And the poll’s conclusion – that selfies are the most popular genre of pictures for young people – is definitely supported by evidence all over Instagram.

Then there’s Snapchat. Since Snapchat is a picture messaging service, it lends itself even more to selfies, since you’re generally just taking a picture of yourself to send to your friends and romantic interests. And if you take a Snapchat picture and think “dang I look cute,” you’re probably going to want to re-take and post somewhere where everyone can see it – like Instagram.

John Paul Tilrow at ReadWrite says there are at least 90 million selfies on Instagram, and that Instagram is “a breeding ground for many people’s most narcissistic tendencies.” Tilrow is a wise man, though may be a little too harsh on Instagram, since there are some remarkable photographs taken with the app, and many outward-looking people who use it to document their lives in a healthy way.

What Tilrow is getting at, which resonates with me and sums up my problem with selfies, is that taking pictures of yourself all the time is a really weird, self-interested thing to do. Especially if you put them on the Internet and expect feedback. It’s asking people to validate how your face looks, not who you are as a person or anything beyond how well you can put yourself together for an “impromptu” snapshot. Doing this a little bit is fine, but making it your main activity on social media is bizarrely solipsistic.

OK, but if selfies are so awful, why are they so popular? First of all, the Internet is great for many things, but one of the things it provides is a whole bunch of unwarranted encouragement for narcissistic behavior. Friends shouldn’t let friends post countless selfies, but they do – and while I stand by my claim that selfies are generally much more interesting to the person taking them than to anyone else, we still throw each other bones by ‘liking’ these odious portraits of Dorian Boring and going so far as to comment about how cute our friends look with their arms wrapping around the outside of the photo. So it’s not your fault if you’re a selfie addict … you’ve probably gotten tons of validation for being one. You can see how people get caught in the hamster-wheel of taking photos, getting social approval, and then taking more photos, when you look at phenomena like the Tumblr girls subculture, which thrives on pointless self-portraiture.

Endorsing a culture of selfies will bring us nothing good. You know who got her start posing for self-glamor shots? Tila Tequila. And we all know how that turned out. Selfies are the social media equivalent of junk food and we’ve given ourselves Instagram Diabetes.

Guys, this is a heartfelt plea: Be more interesting on social media. Selfies are the boringest. Fine, take a couple, but once you’ve done that, taking more and more adds nothing to the world. At least spice things up and download Snapcat to let your cat get in on the action.

Topics
TikTok Now is the latest attempt to clone BeReal
Instagram has finally fixed the Stories sound bug in the latest version of its iPhone app
Snapchat’s new Dual Camera uses both front and rear cameras simultaneously
Snap’s Pixy drone flies off into the sunset as it’s reportedly canceled
Staying on Twitter? Here are two ways to make it easier
Elon Musk now Twitter CEO after firing entire board
Twitter Blue is losing Ad Free Articles and Musk’s latest tweets indicate further changes
Clear Mode on TikTok: Here’s what it is and how to use it
Twitter’s edit button could soon be free for all users
Instagram to soon let creators make NFTs and sell them to fans
Elon Musk to cut half of Twitter workforce, report says
Twitter reportedly plans to enable Edit Tweet for everyone this week
Twitter to start layoffs on Friday, internal email reveals