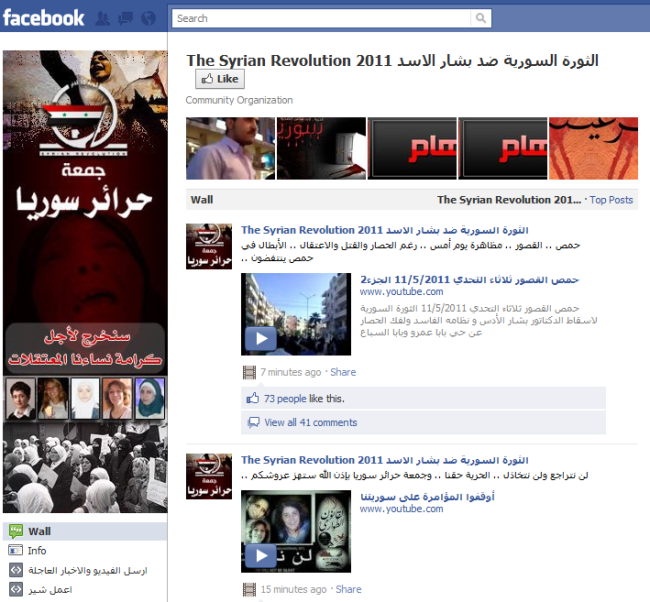 Syria is the latest middle eastern country to catch Facebook Revolution fever. Unfortunately, it looks as if the activists may have far bigger worries than their predecessors, and recent claims report heavy violence and torture at the hand of the Syrian government. One demonstrator told the Telegraph “Some of our people who have been taken have been broken under the most severe torture, and they have revealed passwords and names.” Meaning the activists’ social networking accounts, which were being used to coordinate protests, harbor sensitive information, and communicate with family as well as beyond the country, have been compromised. “The lines of communication have almost been completely severed.”

Egypt, Libya, Tunisia, and a handful of other repressed countries that have relied on digital media to aid their plights were thwarted by their governments’ attempts to shut down networks. However Syria’s situation is somewhat different, as its oppressors’ are using additional tactics to acquire passwords and information (including names of those leading the movement) and disassembling the operation from the inside. Worse yet, the Syrian government is not only using brute force and severing communication: It’s using the technology activists have come to rely on against them.

According to Asharq Al-Aswaq, Facebook shut down the government’s official armed forces’ fan page dubbed the Syrian Electronic Army yesterday for its heavy use of propaganda and for advocating users to spam the Facebook pages of protestors. The site also noted that an administrator of the page said he has a “surprise” planned in retaliation for Facebook, and that the site has been added “to the list of accomplices against Syria.”

This surprise may have come in the form of cyber attacks against Syrian users, according to the Electronic Frontier Foundation. The non-profit Internet defense service claims that the Syrian Telecom Ministry had launched an attack against the HTTPS version of Facebook. While unsophisticated and easy to block by paying attention to security warnings, it has managed to gain complete access to unwitting user’s accounts.

These digital and more harrowing physical struggles between the Syrian government and citizens involved in the uprising continue to surface as journalists attempt to eke information out of the reclusive country. Members of the foreign media are currently banned from the country, but Times’ correspondent Martin Fletcher attempted to pose as a tourist to investigate the situation, only to be arrested and interrogated. He says during his detainment in a basement, young men were being hauled in and that “Quite clearly what was happening, was the regime was rounding up any young man of fighting age it could find on the streets and locking them up.”

This beloved TikTok hashtag just got its own app feature
TikTok Now is the latest attempt to clone BeReal
How to post on Pinterest. An Easy Beginner’s Guide
Instagram to start testing a repost feature
Snapchat is down right now. Here’s what we know
The more Instagram copies TikTok, the more I hate using it
Elon Musk hints that he could start his own social media platform
Facebook Messenger finally starts testing end-to-end encryption for all chats
What does a check mark mean on Facebook Messenger?
Twitter’s latest features are all about curbing election misinformation
Snapchat Plus subscribers are getting these four new features today
You can (sort of) generate art like Dall-E with TikTok’s latest filter
You can now use the Add Yours sticker on Reels for Facebook and Instagram