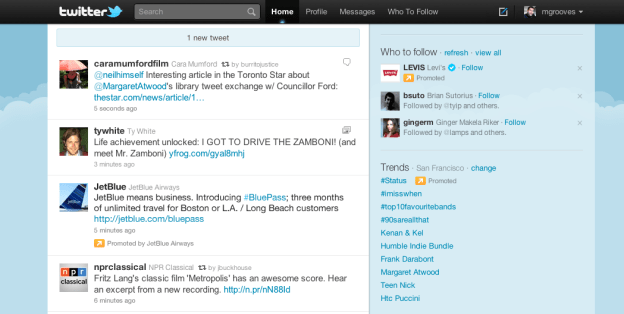 The phrase “Promoted Tweets” is almost slanderous given users’ initial reaction to the Twitter marketing scheme. When an internal memo leaked earlier this year revealing the microblogging site’s plans for monetization, we were first introduced to Promoted Tweets. The concept is different from former Twitter ad schemes because regardless of who you follow, you will see random ads in your feed.

While Promoted Tweets are making their first appearance on the site, they aren’t diving into completely interrupting your feed with ads from companies you don’t follow. At least not yet. For the time being, you will only be subjected to Promoted Tweets from companies and brands you already follow. “We all come to Twitter to connect with the latest information on the topics and people we care about. So when we decide to follow a favorite brand, business or charitable organization, we expect to be among the first to get a special announcement, access to exclusive content or a great offer,” Twitter explains.

“That’s why starting today, we’re introducing a way to ensure that the most important Tweets from the organizations you follow reach you directly, by place them at or near the top of your timeline.” Wisely, Twitter also explains the ads will only appear once in your timeline and you can dismiss them if you so choose.

It’s smart to introduce Promoted Tweets to users by limiting it to brands we already associate with: We’re probably relatively used to seeing ad-like promotions from these types of accounts already. And the more accepting users become of this, the less jolting it will be when ads from accounts we don’t follow begin appearing in the timeline. Best Western, Dell, Groupon, HPO, JetBlue, LivingSocial, Xbox, Starbarks, and Virgin America are among the first companies testing out the feature.

So for the moment, it’s like advertising-light will hit your feed. It’s mildly obnoxious and easily ignored. We’re guessing the reaction to this introductory phase of Promoted Tweets will be tepid, but there has to be at least some concern this is a slippery slope into an ad-infested Twitter timeline.

Topics
Level up your company’s social media strategy with Sprout Social
Many Twitter accounts could soon lose blue checkmarks
Twitter attempts to sort out verification system with new badges
What is Twitter Blue and is it worth it?
Elon Musk reveals date for Twitter Blue relaunch
Twitter closes offices as ‘work pledge’ deadline passes
What is Ambient Mode on YouTube?
What is BeReal?
How to delete a BeReal post
How to use TikTok’s voice changer
Hive Social is my favorite Twitter alternative, but that’s not saying much
Elon Musk meets Apple’s Tim Cook to settle dispute
What does the lock mean on Snapchat?