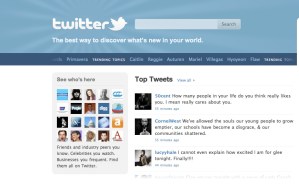 This is going to be a work in progress and Twitter is rolling out in-stream advertising slowly. The company will begin testing Promoted Tweets within one of its partners, HootSuite. Twitter will be experimenting with how and when to place the ads, hopefully to be as unobtrusive to the microblogging companies loyal users.

Promoted Tweets aren’t going to be entirely random. The key here is relevance and Twitter wants to make sure that the ads you see in your stream are directed at you.

Reactions to in-stream ads are expected to be mixed. The Twitterati is expected to be rather displeased with seeing their stream “polluted” with ads, but there is also agreement that Twitter can’t continue forever without generating more revenue.

According to Ad Age, Twitter’s partners for in-stream advertising include Virgin, Starbucks and Red Bull. Those companies were also part of previous Promoted Tweet campaigns running on Twitter.  As we mentioned last month, Twitter was selling Promoted Tweets for upwards of $100,000. It’s unclear what advertisers may be paying for in-stream ads.