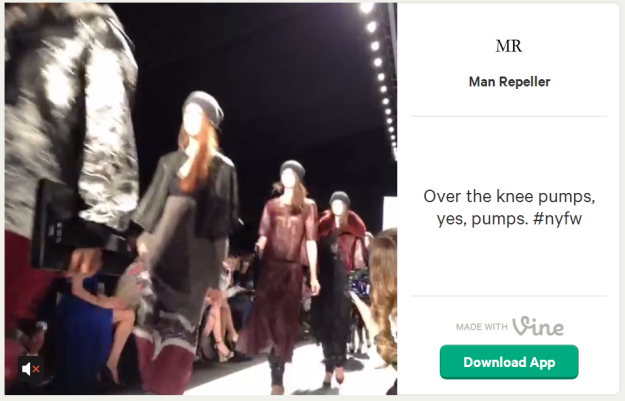 Back in 2010, Instagram was beginning its ascent to the top of the photo-sharing platform. It was swiftly blossoming into a startup darling, well on its way to becoming the app of choice for collecting, filtering, and sharing… everything. Including New York Fashion Week: Two years ago, models, designers, critics, celebrities, and attendees installed Instagram and began documenting the fashion event in an entirely new way – in real-time, with filters, with likes, shares, and location-stamps.

Now, a new app is making its Fashion Week debut: Vine. The recently launched, recently controversy-courting Vine is already becoming a New York Fashion Week staple as the event unfolds. And Twitter is doing its damnedest to promote it. The platform is directing users to its #VineWalk hashtag as well as getting fashion insiders to use the app and tweet their creations. (Tap the blank image twice if the Vine doesn’t auto-play).

And technically speaking, Vine might make more sense as a Fashion Week documenting tool than Instagram does. Why?

1. Models move. For all of the wonderful things the iPhone can do, it cannot capture action shots. This translates to a feed of blurry, thin people wearing what may or may not be beautiful clothing. For every great shot of a model at the end of the catwalk, there are 10 blurry ones that look like this:

2. Forget the filter. Look, I love a good filter – and you’re lying if you say you don’t. But there is something disingenuous to onlookers if you’re manipulating images of art. While I don’t pretend to have any fashion knowledge, I do know that for many people, it’s like looking at a painting or a sculpture. Wouldn’t it be strange to only have see the Mona Lisa in an Amaro filter? Or The Persistence of Memory in a Toaster Wash? Sometimes, the closest, most accurate representation is more valuable than the fun or even improving edits you can add.

3. End the feed flood. We’re all guilty of it: You go somewhere brag-worthy, and the phone comes out. You Instagram the first thing you see. Then the second tops it. Then the third. And on and on and on until all your followers have a filtered flipbook of your impressive day. The fact that Vine lets you capture more than that split-second might cut down on news stream clutter, at least by a fraction.

But beauty is in the eye of the beholder, and debating the different merits of Instagram and Vine isn’t as interesting as examining their similarities. Both startups are following very similar trajectories: Both are image-sharing apps acquired by much larger social platforms that are thus putting a lot of eyeballs on their respective acquisitions.

The question that bears being asked now is, will Vine will actually start to steal some of Instagram’s spotlight, or is it just enjoying some extended launch hype (drawn out in part to its adult content and ensuing App Store issues)? Vine is being experimented with by publishers – just like Instagram has been, and now it’s being adopted by the fashion community – again, just like Instagram.

Their respective rises are largely running in parallel, and it will be interesting to see how people continue to use Vine continues, what hiccups the app experiences, and how or if it gives Instagram any competiton (and, for that matter, whether Instagram suffers from its lack of Twitter integration). For now, the question remains whether Vine is so appealing because it has the same magic Instagram had to convert users into loyalists and addicts – or does the fact that Twitter is throwing so much promotion behind it have more to do with its viral growth? It’s too early to say, but something tells me we’ll have plenty of time to figure it out.

Twitter’s SMS two-factor authentication is having issues. Here’s how to switch methods
Clear Mode on TikTok: Here’s what it is and how to use it
How to use Twitter Advanced Search
YouTube brings pinch to zoom and video navigation changes to everyone
TikTok is launching a dedicated gaming channel
What do the eyes mean on your Snapchat Story?
Elon Musk finally in charge of Twitter, reports say
Elon Musk officially owns Twitter now: a timeline of how we got here
Twitter to start charging for verification mark, reports say
Having trouble accessing your Instagram account? You’re not alone
Elon Musk considers bringing Vine back from the dead
Staying on Twitter? Here are two ways to make it easier
Elon Musk now Twitter CEO after firing entire board