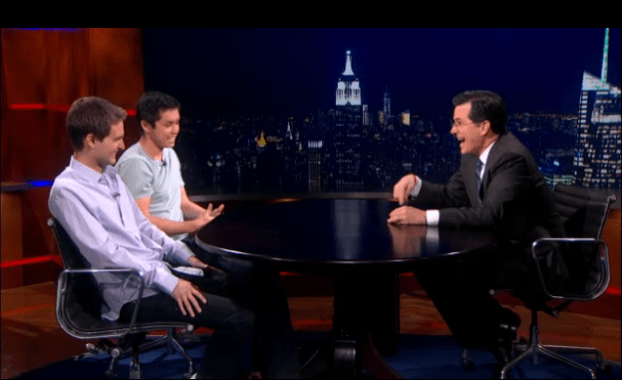 You know you’ve made it when people are making fun of you. And if you make it to one of the grand jesters of social satire, that’s even better. The founders of Snapchat appeared on The Colbert Report this week, and Stephen, as per usual, was in fine form.

“I am down with all the social networking buzzword.biz,” Colbert said at the beginning of the interview with Snapchat creators Evan Spiegel and Bobby Murphy about their immensely popular photo-messaging app.

Surprisingly, when they talked to Colbert about the app, they explicitly mentioned that you can take screenshots of the photos – something that disrupts the illusion of impermanence associated with the pictures. Of course, the app alerts users if their photos get captured via screenshot, but you’d think they’d warn users against doing so, not publicize the possibility.

“Why do you have the option for the photos to disappear? What are the users of Snapchat ashamed of?” Colbert asked.

“I think the idea is to change the idea of what a photograph is and use it as a means of communication,” Murphy explained. “The disappearing aspect is an attempt to bring the service back to normal human communication, which is ephemeral and transient.”

But Colbert didn’t let the two founders get off without discussing the app’s potential for naughty-pic sending. “Is this a sexting app?” he asked, and repeated himself in case they didn’t hear. The founders said that, since you can take a screenshot, it’s not an ideal way to send X-rated shots. Colbert asked if there was a better way to send sexts, but Murphy and Spiegel had no answers.

The young founders came across as amiable and game, laughing off Colbert’s jabs: “Have you guys made a profit yet, or does that disappear after 10 seconds too?”

The interview was mostly lighthearted, although Murphy said they’re looking for ways to monetize in the future, which could mean changes to Snapchat’s current format – will it go the way of Instagram and start playing around with ads? If so, hopefully they’ll disappear after 10 seconds and not clog up the clean interface.

Topics
Having trouble accessing your Instagram account? You’re not alone
How to use Twitter Advanced Search
WhatsApp down globally Tuesday morning
YouTube brings pinch to zoom and video navigation changes to everyone
TikTok is launching a dedicated gaming channel
What do the eyes mean on your Snapchat Story?
Elon Musk finally in charge of Twitter, reports say
Elon Musk officially owns Twitter now: a timeline of how we got here
Twitter to start charging for verification mark, reports say
Elon Musk considers bringing Vine back from the dead
Staying on Twitter? Here are two ways to make it easier
Elon Musk now Twitter CEO after firing entire board
Twitter Blue is losing Ad Free Articles and Musk’s latest tweets indicate further changes