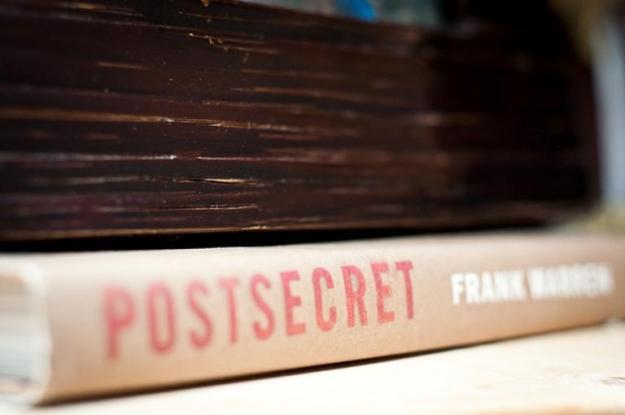 Have you heard whispers of Whisper? The secret-telling app, which lets users anonymously post images and text revealing secrets and confessing personal experiences, is gaining a lot of traction on college campuses, with over two million people downloading and using the app on iOS since it debuted in 2012. And it expanded its availability to Android in May, widening its potential fanbase even further. It costs $5.99 a month to use the app and swap intimacies, and it received a hefty $3 million investment from Lightspeed and other funders, sparking speculation that it could soon reach Snapchat levels of popularity.

But Whisper is missing at least one fan: Frank Warren, the creator of PostSecret, the enormously successful blog art project that collects similar-looking digital confessions. PostSecret touts itself as the largest advertisement-free blog in the world, and since it began in 2005 it has blossomed into a true Internet phenomenon. Frank has published five books compiling secrets he received from around the world, and the blog enjoys an active community of fans and contributors. PostSecret branched into the app world in 2011, but because some of the two million submissions were abusive, Warren shut the app down in 2012.

And now the same issue might be resurfacing, but in a new form. Warren sees Whisper as a new and problematic incarnation of the PostSecret app, although he stresses that the two have no affiliation.

Warren recently took to PostSecret’s Facebook page to voice his concerns. “Despite how the app is advertised, how it looks, and how the marketing is targeted at PostSecret fans on Facebook, there is zero connection with this new app and PostSecret. I don’t support the current version of the app because I believe it’s vulnerable to some of the same bullying and predatory behavior that caused me to kill the PostSecret App.” Warren went on to note that he finds the way the app is being monetized worrisome. Post Secret fans responded, largely noting that they did not believe Whisper had the same core values as the former network.

The two projects easily overlap in that they encourage fans to submit extremely similar content – combinations of image and text revealing secrets. And they both focus on anonymity. But Warren has made a conscious decision to maintain more control over the PostSecret project by limiting it to a blog and dismantling the app to prevent abuses, while the format of Whisper allows more unguided interactions – which can be fun for users who respect each other, but can also place other users in a vulnerable position if they receive bullying comments from the community.

“I still believe that there can be a powerful anonymous-based alternative social network that could rival Facebook and Twitter.”

“There is no culture that underlies the technology. Also, Whisper is monetized in a way that could attract sexual predators,” Warren says, emphasizing the fact that a secret-sharing community needs a respectful culture. But he places the blame more on the design than the Whisper community. “Many of the problems of a secret-based anonymous app are designed-based. Get the design right and with proper management many serious problems can be avoided.”

Warren doesn’t have a problem with the idea of an app or social network stemming from secret-sharing; just how Whisper is implementing its specific project. “I still believe that there can be a powerful anonymous-based alternative social network that could rival Facebook and Twitter. I certainly learned a lot from the brilliant but short life of the PostSecret App.”

For its part, Whisper has no beef with Post Secret, making this a one-sided feud. Michael Heyward, one of Whisper’s co-founders, speaks highly of Warren. “We have nothing but the utmost respect and admiration for Frank Warren. We consider him an inspiration for us, and are huge fans of his mission.“

But Heyward certainly disputes how Warren characterizes Whisper. “The vast majority of our resources go into providing a safe community for our users. The primary reason for us raising venture funding is because of the incredible of amount of resources it takes to create a safe community- which is where the majority of our funds are allocated. We have over 30 full time moderators in addition to countless state of the art tools to maintain the integrity of our community. Additionally, the success of Whisper has allowed us to create a non profit organization with the primary goal being to reduce stigma around mental health on college campuses.“

Who will prevail in the battle of the secret keepers? Although the projects are similar, they are just different enough that they can co-exist without cannibalizing each other, although Warren openly voices his concerns about Whisper. If PostSecret re-launches its app, though, they could be in even more direct competition, and things may further heat up.

Topics
How to post a Short on YouTube
What does the lock mean on Snapchat?
How to use TikTok’s voice changer
How to delete a BeReal post
Elon Musk reveals date for Twitter Blue relaunch
What is Twitter Blue and is it worth it?
Twitter closes offices as ‘work pledge’ deadline passes
What is Ambient Mode on YouTube?
What is BeReal?
Twitter attempts to sort out verification system with new badges
Hive Social is my favorite Twitter alternative, but that’s not saying much
Elon Musk meets Apple’s Tim Cook to settle dispute
How to block people on Snapchat