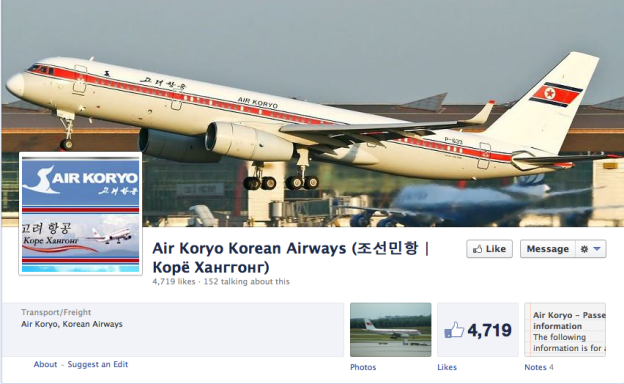 Out of all the airlines to have an active, friendly Facebook presence, it’s hard to find a less likely candidate than Air Koryo, North Korea’s state-owned (and only) air carrier. It has the ignominious distinction of being the only airline to receive just one star from Skytrax, and its official website doesn’t work. Air Koryo is the farthest from technologically advanced you can get for a functioning airline, yet the Facebook page is constantly updated with photos and friendly messages.

North Korea just got visits from Dennis Rodman and Google’s Eric Schmidt, but most citizens do not have access to the Internet in the same way that people do in other countries. They are generally limited to a tightly controlled intranet, which is why people rarely interact with North Koreans within the state on sites like Facebook. So how is Air Koryo doing it?

Are things changing in North Korea?

North Korea made efforts to jump into social media with an official Twitter account, but while the DPRK is officially logged on, its citizens are not allowed to use global social networks – instead, some of them use a domestic social network to chat with fellow North Koreans. The country’s fierce secrecy makes it difficult to verify exactly what goes on there with technology – so hoaxes like the recent rumor that the Pirate Bay moved to Pyongyang get taken more seriously than they should. At the beginning of March, foreigners gained access to data, and were able to Instagram and tweet their trips using the Koryolink 3G network, but that policy is currently on hiatus once again.

There are two U.S. journalists with access to North Korea — and one of them, AP’s Korea bureau chief Jean H. Lee, discussed how much North Koreans can use social media at SXSW this year. She discussed the growing discrepancy between what foreigners get to access within the country (no firewalls), and what North Koreans use. During her SXSW speech, Lee said some elite citizens in Pyongyang are aware that their access is circumscribed, but noted “their society is structured around being different than the rest of the world. They accept, to a certain degree, that they have access to certain things and that’s just how it is.”

So it’s surprising to see Air Koryo networking away with an active English-language Facebook page, and it immediately raises a question — who’s updating it? Air Koryo’s official webpage is almost constantly down, and the Twitter account stands abandoned.

So you may experience cognitive dissonance looking at the savvy Facebook status updates from an airline without any other functional online presence. What gives?

From Russia with love … apparently

I entered into a dialogue with the Air Koryo Facebook page administrators to try to figure out exactly how they were able to run such an efficient Facebook page given the great firewall of North Korea. As you would expect, pinpointing the people behind the page proved challenging, but it’s fairly obvious that the page is either unofficial or very unconventionally operated, since the responses were informal and contained numerous spelling errors.

The Facebook page administrators evaded answering most of my questions, although they made it clear the people behind the Facebook account were not the same as the administrators for its Twitter page, noting “the Twitter page that is labeled “Air Koryo” didn’t really ever post many informative information regarding the carriers operations, i.e. the last post was about an irrelevant arms shipment flight in Bangkok DMK Airport. Hence the group wasn’t linked to providing any information on the carrier but a personal kind of activity.”

The Air Koryo Facebook administrators shied away from my question asking for their personal information (whether they were in the country, how many employees were running the page) and claimed not to understand my question about the 광명, which is the Korean name for the intranet — it means “bright star.”

It’s unclear exactly who is behind the page, it’s probably not an airline employee from within the country – and it may not be as official as many reporters originally thought. While initial reports on Air Koryo’s incongruously convivial Facebook described it as the airline’s authorized page, it may actually be an unsanctioned page operating autonomously or semi-autonomously.

There are a number of clues that support this theory. The Air Koryo page operates in English, but it also prominently features Russian phrases along with some Korean. This is strange since the majority of flights are booked between China and North Korea, so it would make more sense for Chinese to be the next most prominent language on the site.

Air Koryo’s travel agent liasion in charge of issuing tickets to the Americas, Uri Tours, works with North Korean Air Koryo employees on the ground in their Beijing offices and in Pyongyang. Digital Trends asked Uri Tours what they knew about the Air Koryo Facebook page. Both CEO Andrea Lee and Operations Chief John Dantzler-Wolfe said they believe Air Koryo does not run the page itself, with Lee noting “My understanding is that it’s not run by them, it’s run by one of their independent cell leaders. I think that it is the Russian cell station.”

Uri Tours reached out to their Air Koryo contacts to confirm that the headquarters have nothing to do with the Facebook page, but they did not respond – according to Lee, the lack of response is “because it’s probably unlikely that it’s an official page.” Despite the lack of comment, Uri Tours believes the Russian theory. “We don’t know who runs the Air Koryo Facebook page, but we suspect it’s an independent sales agent in Russia.”

Chatting with North Korea (but not really)

The informal tone of the page came through more clearly as I attempted to communicate with the Air Koryo Facebook admins. I asked if they ever considered using Skype to communicate with customers, and they clearly did not appreciate the question, answering “Not that we know of, what would customers want with Skype’ing [sic] an airline, it’s not a convectional [sic] tool used by carriers worldwide from my understanding.” I also eventually asked point-blank if they were based in North Korea and if it was an official account, but they did not respond.

Since the administrators remain aloof, it’s hard to know for sure whether the site operates independent of the North Korean government, or if whoever is behind it agreed to be the representative for the airline. The Russian influence of the page hints that someone living or familiar with Russia is involved,  however.

The signs that point to a Russian administrator are clear: In addition to the site using Russian language, NK News pointed out that one of the moderators is a pilot from Vladistock who lists his employers as the United Aircraft Corporation, a company affiliated with Air Koryo.

It’s possible that this pilot, either alone or joined by others, is running the page in an attempt to boost Air Koryo’s profile. The Air Koryo page tends to discourage users from posting about politics, and encourages them to stick to aviation, but it also posted somewhat ambivalent updates in the past referring to perceived flaws in North Korean government spending. It seems unlikely that an employee would do that from within Pyongyang without repercussions.

And though posts with any political inferences stopped around 2010, indications that Russians were running the site kept coming. For instance, a special shoutout to Orthodox holidays:

Air Koryo has yet to confirm that this page is not officially sanctioned, but the evidence suggests that it is run autonomously and out of the country.

So what does that say about North Korea’s airline and its apparent out-of-country social media outreach efforts?

As evidenced by its decision to temporarily revoke foreign 3G, the North Korean government is still finding its footing when it comes to how much technology it wants to embrace or reject. The fact that a very active Facebook page for the state-owned airline keeps passing itself off like it’s related to the company indicates that Air Koryo either doesn’t know about it (which it now definitely will, thanks to Uri Tours) or that it isn’t bothered by the unofficial representation.

This willingness to let foreigners share information about North Korea online – in areas of the digital world ordinary North Koreans do not access – hints that North Korea is more open to outsiders peering in and learning more about the country than one might assume. This is especially interesting as the country’s militaristic rhetoric continues to escalate. North Korea’s government is often the only thing people talk about when they talk about the country, and the current political atmosphere makes it even harder to look at anything else. The human rights abuses perpetrated by the Kim dynasty are very real – and the current government’s military provocations are serious threats.

The fact that North Korea remains taciturn and hostile towards many foreigners makes the Air Koryo Facebook page especially poignant, even if it’s run by vagabond Russians. It’s a weird, unique little digital corner of the Internet – but you have to ask, “why?” If the mounting evidence is true and someone in Russia is running the Air Koryo Facebook page, just … why? The first possibility is they have a vested interest in the airline (i.e., are getting paid): Perhaps investors or Air Koryo board members have outsourced this effort because of the obvious draw of having a foot in the social media market. The less likely conclusion is that the Air Koryo Facebook page is a passion project run by someone who just truly loves aviation and North Korea – it seems far-fetched, but stranger things have happened … especially when it comes to international intrigue and the Internet.