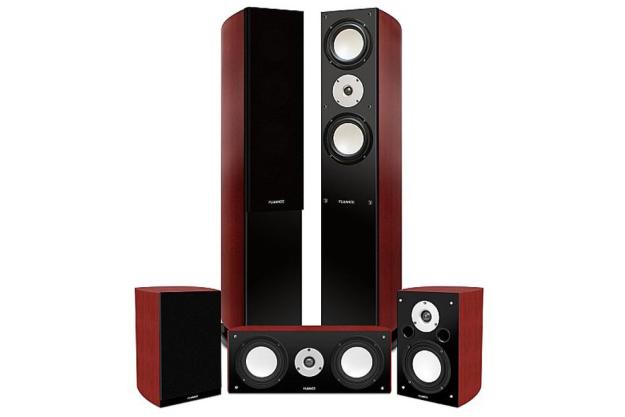 “We don’t have a ‘Digital Trends High Value Award,’ but if we did, this system would most surely get it.”

On its website, Fluance audio describes its new XLHTB 5-speaker home theater system as “ambitious,” and while we’re generally reluctant to concur with marketing hype from the mouths of manufacturers, on this point, we’re in full agreement. For the meager price of $800, the system offers two full-sized, floor-standing speakers, a center speaker, and a pair of two-way surround speakers. All of the components are finished with an attractive mahogany veneer, and the towers even include a pair of down-firing 8-inch woofers as a bonus – not bad for a system costing well under $1,000.

Still, though we’ve always been impressed with Fluance’s almost unbelievable price points, we’ve been significantly less impressed with its products’ sonic performance. Our reviews of its ESHTB system and towering FITSD600 speaker dock included such negative comments as “anemic bass,” “lack of clarity,” and “distortion in the midrange” – not exactly confidence-inspiring words.

So you can imagine we were less than optimistic (and a little surprised) when Fluance confidently approached us with its XLHTB system, assuring us it had the sonic goods to keep us from balking this time around. Was the value-focused brand able to deliver? Read on to find out.

As we carted the tall-boy towers that anchor the XLHTB system to our testing room, we couldn’t help but notice the packages were suspiciously light. While that made setting them up breezy, we worried the wood comprising the speakers’ cabinetry would be less-than-capable of controlling resonances.

We think the XLHTB’s mahogany finish is pretty attractive, though it is a bit less red in hue than we expected based on the product photos we’ve seen online (for us, that’s a good thing). The polished wood veneer is offset by gloss-black speaker baffles which protrude slightly at the top half of the speaker cabinet – a feature we think some may find odd-looking.

As attractive as the cabinetry may be, a quick rap with our knuckles produced a hollow, resonant sound that furthered our concerns over cabinet resonance.

As we began wiring the towers, we were pleased to find two sets of gold-plated 5-way binding posts at the back of each speaker to allow for bi-amping, though we would eventually find the speakers were easily driven by a moderately-powered A/V receiver. Below the binding posts we found the port used to reinforce the bass output of each speaker’s 8-inch, down-firing woofer.

Each tower features two 6.5-inch midrange drivers sandwiching a charcoal-grey, silk dome tweeter, which is surrounded by a metallic baffle of its own. The towers measure 45.8 inches tall and are a little over a foot deep.

Each surround speaker sports a pair of forward-firing bass ports, set side by side between its 5-inch midrange driver and 1-inch silk tweeter. The surround speakers are remarkably light, even in comparison to the rest of the system, weighing in at only 8.6 lbs. each. Interestingly, Fluance indicates the surrounds’ crossover point is set at a lofty 6,000Hz, placing an unusually high amount of responsibility on the midrange driver.

To get things started, we singled out the towers and auditioned them in stereo. Straight out of the box, the speakers revealed a clear and accurate sound signature, notable for tight transients in the midrange and treble, as well as ample, defined bass. Though we think the system could benefit from the addition of a full-sized subwoofer for home-theater applications, the XLHTB’s built-in 8-inch woofers provided an ample foundation for music listening.

The XLHTB’s towers cruised through our electronic-based music selections with ease, rendering a wide but shallow soundstage with a convincing center image. We would have appreciated a bit more resonance and definition, but the speakers were extremely clean and quick on the draw with the multitude of synth patches from favorites like Muse, and Vampire Weekend.

Listening on, we enjoyed sparkling clarity in the midrange and treble and well-drawn pulses from the lower register. Vocals were articulately rendered in the center, and the speakers showed off well-defined stick work on rim shots and ride cymbals in the percussion. However, we wished at times for a bit more warmth in the overall delivery, finding the speakers a bit clinical and brittle.

As we dialed up some acoustic-based selections, the towers did an impressive job of reproducing thick, crushed snare and toms and vibrantly-metallic string play on acoustic guitar. But the lack of warmth continued to bother us. Upon closer listening, we detected a pinched-in midrange (which, we suspect, is related to one of the speakers’ crossover points). As we turned our musical attention toward our bluegrass collection, we noted a squeaky edge to violin and mandolin which stole from the normally fluid appeal of the instruments. All but the warmest recordings seemed to have just a bit of a sharp edge, never quite serving up the full-bodied richness that we hungered for.

With that said, the floor-standing towers exhibited a brilliance which we found particularly impressive given the speakers’ price. Extremely dense productions like “The Dreaming Tree” by Dave Matthews were served on a wide aural plane, filling the room with varied instrumentation convincingly delivering the sensation of a live performance with powerful force. Though we pushed the speakers to high volumes, we noted no audible distortion.

Ironically, while we wished for a bit more warmth to balance out the XLHTB towers’ otherwise pristine character, the center channel speaker suffered from the opposite problem. It sounded extremely rolled off in the treble and was artificially pumped up in the lower midrange. This resulted in a muddled sound signature from the one speaker we expect to sound particularly clear – forward, even – in the midrange.

Dialogue delivered from our Blu-ray test sequences confirmed what we suspected after using pink-noise test tones to calibrate the speaker system: this is not a great center channel speaker. Voices were thick and undefined, and cranking up the center channel’s output level only resulted in more of the same. The issue was especially frustrating while watching Tangled when, during an escape sequence, the lead character’s voice sounded so muffled, Zach Levi might as well have voiced the part with a sock in his mouth. Sound effects took a hit too, with effects like the snapping of a wooden dam sounding bland and opaque – a stark contrast to the treatment those same effects got from the rest of the system.

The timbral mismatch was distracting enough to steal from the excitement of even the most immersive scenes. For instance, during the famed T-Rex scene from Jurassic Park, we heard an audible shift in tonal color as the sound of snapping metal wires whipped from left to right across the front three speakers. Though the shift was subtle, it was enough to yank us out of the illusion of the surround atmosphere.

Lest we seem disproportionately focused on the disappointing center channel, we should point out that, otherwise, the system did an impressive job of creating a dazzling surround environment. For example, the dual scene in Tron: Legacy brought about brilliantly detailed “clinks” as each piece of shattered game avatars fell, skillful channel transitions as energy discs strafed past our head, and powerful explosions from the XLHTB’s capable 8-inch woofers. It helped that the crystalline accuracy of the main towers was mirrored by the small surrounds, bringing a tangible realism to everything from falling rain to soft footsteps.

At $500 for the pair, the Fluance XLHTB towers offer some serious value to those looking to upgrade their system. These speakers may not provide the sort of granular detail or sonic depth that experienced audiophiles seek, but we think the audio enthusiast on a budget will be astonished by how much speaker they can get at this price.

In fact, were this review restricted to just the two tower speakers, we’d rate them at 8, mostly due to outstanding bang-for-your-buck factor. However, this is a system package, and as such, we have to take into consideration the system’s performance as a whole. When we do, the strangely-sculpted center speaker sours our impression. While the mains and surround channel speakers offer a bright and accurate sound, the center speaker brings enough darkness to the table to disrupt the subterfuge of fantasy we crave in a surround sound environment.

With all of that said, you’ll be hard pressed to find another system that brings as much powerful hardware to the table as Fluance’s XLHTB does for $800. We don’t have a ‘Digital Trends High Value Award,’ but if we did, this system would most surely get it.