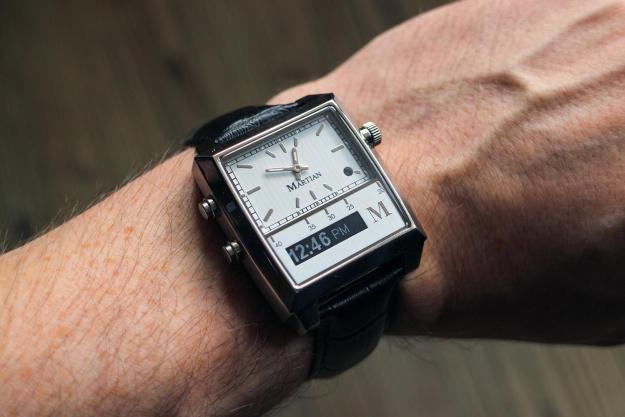 “The Martian Passport is using tech that’s a couple of years old now and it shows. Wait for the new model or look elsewhere.”

The Martian Passport is a smartwatch that hooks up with your smartphone to offer notifications on a tiny screen on your wrist. It also contains a speaker and microphone, and has the ability to act just like a Bluetooth headset for receiving and making calls. It works with Android and iOS, and it has a few other handy features.

Most importantly, it’s also a watch. The watch face is separate from the smart features of the phone, looks like any traditional watch, and runs on its own battery, which promises around two years of service.

When the Martian Passport first came out a couple of years ago, the smartwatch market was far less crowded. We liked the follow-up, Martian Notifier because of its simplicity and cheap price tag. But the Passport isn’t as appealing.

If you’re not a fan of masculine, retro designs, the aesthetic of the Martian Passport is unlikely to excite you. It has a chunky stainless steel body and clasp, and it comes with a black silicone strap, or a leather strap in black or white. The back is plastic.

The watch face is square and divided into two sections:

Looking at it side on you can see how thick it is. At 13.34mm it’s probably a lot heftier than your phone, and the microphone and speaker grills are on the right and bottom edges, guaranteed that they’ll collect dust and grime.

In order to charge the Passport you’ll need to pry open the wee flap on the right hand side and use a Micro USB cable. Martian provided a proprietary cable in the box which has a longer head than a standard charger, but it does actually work with a standard Micro USB cable.

Compared to the Notifier, the Passport feels very uncomfortable. It’s angular, bulky, and the leather strap is not as comfortable as the silicone version. It’s hard to imagine this watch on a slender wrist and the style is unashamedly manly.

A smattering of handy features

It’s nice that the Martian Passport is compatible with Android and iOS devices. You pair via Bluetooth and it’s as simple as holding the top button on the watch down until the LED flashes, and then picking it from the Bluetooth menu on your phone.

The Martian app is where you’ll decide what you want the Passport to do. I tried out the Android version with a Sony Xperia Z2 and it paired no problem. The app allows you to dictate what kind of alerts you want to receive, from incoming calls to emails to Facebook messages. When selected, these come through on your watch as 40 character messages.

You can also use the app to adjust the vibration intensity, set alarms, tweak what is displayed in terms of time and weather, and turn on some of the other features.

There are a few extras that can be quite handy, as well:

Can it go the distance?

It takes about 3 hours to charge the Martian Passport up and a full battery will give you up to a week of standby or 2 hours of talk time. If you use the voice controls a bit and get a lot of notifications then you’re going to need to charge this daily, or at least every other day.

The watch is on a separate battery, so it will always work as a watch, even when the smart feature battery gives up. With two years worth of juice this sounds great, but there is an issue. When it does finally run out, you can’t just open it up and replace it, you have to get Martian to do it for you at a cost of $70, which is inconvenient and expensive.

The Passport’s feature set is very limited when you compare this with the latest Android Wear devices or the Apple Watch. The lack of a larger screen covering the whole watch face means that customization is out. There’s also no camera, no navigation, no Google Now cards, and you won’t find any fitness features here at all.

Additional shortcomings include the lack of waterproofing and the price.

Two years ago, when smartwatches were still a novelty, the Martian Passport could have been a good buy for a thick-wristed executive keen to try out the new technology in a subtle form factor. At $300, it is now much too expensive to be worth considering when you look at the other options on the market. You could pick up the far superior LG G Watch R for that price.

If you shop around, you can find the Martian Passport for $240 at Amazon, but you’d still be better served buying a Moto 360 for a few dollars more, and the Pebble Steel is only $200 now. Whatever way you slice it, the Passport is too expensive and too limited.

Not everyone wants a smartwatch with a lot of features, not least because the battery life suffers, so there is definitely space in the market for the Martian brand. That separation of traditional watch and smartwatch is a clever move, and the notifications and voice controls are still among the handiest functions you’ll find on smartwatches right now. But the Passport is beginning to show its age, and we cannot recommend it.

The good news is that we spoke to Martian President, Stan Kinsey, at Mobile World Congress 2015, and the company has a new range of updated smartwatches up its sleeve. They’ll be water resistant and the controls will all move onto the right side. They also come in a wide range of round-face designs, including a pair designed in partnership with Guess.

If you do like the idea of a Martian watch, then hang fire for the new models due this summer. The Passport has had its day.

Topics
Video-editing app LumaFusion to get a Galaxy Tab S8 launch
Best over-the-counter hearing aids for 2022
Google Pixel 7a: release date, price, specs, and all other rumors
The Nothing Phone is finally coming to the U.S., and I can’t wait
Update your Google Pixel 7 now for three big security and audio features
The best iPhone games to play in December 2022: Marvel Snap and more
I thought iOS 16 would ruin my iPhone 8, but it shocked me
The best Android games available right now (December 2022)
The most innovative tech products of 2022
How to unlock a phone on every carrier in 2022
This ridiculous smartwatch has a hidden pair of earbuds inside
This retro battery pack is way cooler than it has any right to be
Apple Health vs. Samsung Health? What I learned after using both