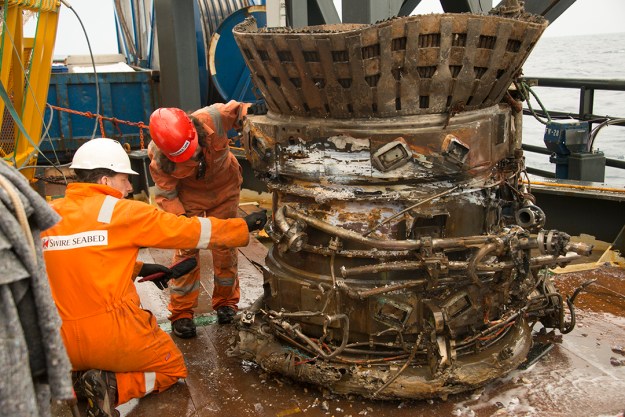 It’s probably not the kind of thing you’d find on most people’s to-do list, but for Amazon CEO Jeff Bezos, diving to the ocean floor to recover the engines of the space rocket that helped take humans to the moon for the very first time was an adventure he couldn’t resist.

Of course, Bezos himself didn’t don a wet suit and single-handedly pull the Apollo 11 engines to the surface, though he may well have looked into the possibility. Instead, the feat was accomplished by the Bezos Expeditions team, a ship called Seabed Worker and several rather boringly named Remotely Operated Vehicles (aka ROVs).

“We’ve seen an underwater wonderland – an incredible sculpture garden of twisted F-1 engines that tells the story of a fiery and violent end, one that serves testament to the Apollo program,” billionaire Bezos wrote on his Expeditions blog on Wednesday. “We photographed many beautiful objects in situ and have now recovered many prime pieces. Each piece we bring on deck conjures for me the thousands of engineers who worked together back then to do what for all time had been thought surely impossible.”

Bezos and his team located the engines – part of the Apollo 11 rocket that took Neil Armstrong, Buzz Aldrin and Michael Collins to the moon in July 1969 – on the seabed 14,000 feet below the surface of the Atlantic Ocean, about 360 miles from the rocket’s launch site in Cape Canaveral.

Writing about the technology that helped bring the engines to the surface, Bezos, who was just five when the first manned moon mission took place, said the ROVs were tethered to the Seabed Worker “with fiber optics for data and electric cables transmitting power at more than 4,000 volts.” He added, “We on the team were often struck by poetic echoes of the lunar missions. The buoyancy of the ROVs looks every bit like microgravity. The blackness of the horizon. The gray and colorless ocean floor. Only the occasional deep sea fish broke the illusion.”

The recovered engines, which Bezos described as “gorgeous”, will be restored to stabilize the hardware and prevent further corrosion.

“We want the hardware to tell its true story, including its 5,000 mile per hour re-entry and subsequent impact with the ocean surface,” the Amazon founder said. “We’re excited to get this hardware on display where just maybe it will inspire something amazing.”

Commenting on Bezos’s efforts to recover the engines, NASA Administrator Charles Bolden said, “This is a historic find and I congratulate the team for its determination and perseverance in the recovery of these important artifacts of our first efforts to send humans beyond Earth orbit.”