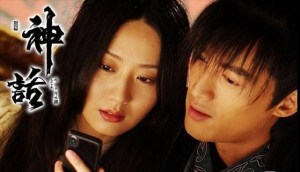 The Chinese government has reportedly banned time travel — in made-for-TV movies, at least.

According to China Hush, television dramas that feature time travel as a primary plot element have become increasingly popular among the Chinese. Most of the time, these often campy TV movies involve a character from the current era traveling back to olden times. There, the character invariably experiences culture shock, but eventually gets used to the ancient ways, falls in love, and lives happily ever after (before?).

While many viewers reportedly find these types of programs “hilarious,” says China Hush, the country’s State Administration of Radio, Film and Television says the movies lack respect not only for the space-time continuum, but for China’s long, rich history.

“The time-travel drama is becoming a hot theme for TV and films,” said the State Administration of Radio, Film and Television, after a recent meeting on the matter. “But its content and the exaggerated performance style are questionable. Many stories are totally made-up and are made to strain for an effect of novelty. The producers and writers are treating the serious history in a frivolous way, which should by no means be encouraged anymore.”

While a proper respect for history is certainly important, this anti-time travel motion seems to us to have less to do with preserving the accuracy of Chinese history, and more to do with controlling the daydreams of a repressed people by restricting the types of art they can create and consume.

As the New Yorker‘s Richard Brody explains, what these “Chinese time-travel plots…have in common is the notion of escape: leaving contemporary, Communist-dominated China for the China of another era, one where, despite mores that are, in some ways, odd and outdated, love and happiness can be found.”

Perhaps someone could convince the curmudgeons at the State Administration of Radio, Film and Television to sit down for a Bill and Ted‘s marathon — we’re certain the sheer radness would change their naysaying ways.

BBC accuses, condemns China of blocking World Service broadcasts
How to record your computer screen
How to save a webpage as a PDF
How to download music from YouTube
How to find archived emails in Gmail and return them to your inbox
How to sync your Outlook Calendar with your Google Calendar
How to block an email address in Gmail
How to easily log in to multiple Gmail accounts at once
How to change your Yahoo password
How to download Vimeo videos to your PC and phone
Kaspersky VPN should be your go-to for secure connections and privacy
Here are two awesome Santa trackers that kids can use today
Install these Chrome extensions on your relative’s new laptop