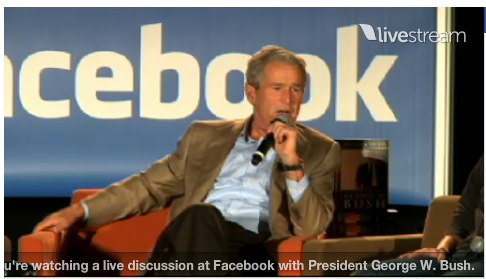 In what was easily one of the more convoluted Facebook events, former President George W. Bush visited the social network’s headquarters for a Q&A session and to promote his book, Decision Points. Right off the bat, Facebook CEO Mark Zuckerberg attempted to lend a little clarity to the situation, asking Bush to explain why he chose to interview at Facebook. “I’m shamelessly marketing,” Bush said, and referenced Facebook’s incredibly dominant hold on the digital world.

Aside to what seemed like endless chuckling and good-natured ribbing between Bush and Zuckerberg, the Q&A focused primarily around the book, which Bush toted as an anecdotal narrative around the notable decisions he made during his presidency. He candidly spoke about the controversies he faced and adamantly defended his decisions as well, while also shedding light on some personal stories.

He also pointed out more than once than Zuckerberg doesn’t have a college degree, and likened the adversity the CEO faces to that surrounding his own administration’s.

Bush was asked about the latest WikiLeaks scandal, and said he believed those behind the link should be prosecuted. He also mentioned he believes the fallout will make it difficult for the US to keep the trust of foreign leaders. Bush compared the situation to one he faced with The New York Times post-9/11, when the publication was going to run information on the government tapping phone calls.

In a somewhat more relevant aside, Bush talked about his tech and gadget experience, citing his administration as “the first to use the e-mail” more heavily than previous presidencies, but that he shied away from the technology. Since he was legally required to archive emails, he didn’t want his words being interpreted incorrectly in the future. He reported that after leaving office, he was a BlackBerry user and since then has been won over by Apple and is a fan of the iPad. He also affirms he utilizes “the Facebook” and no longer uses an iPod.

All in all, the interview was an opportunity for Zuckerberg and Bush to praise each other and for the former president to push his new tome. If anything, the event was a little confusing as the moderator tried to tie Bush’s visit into social networking and digital media, but failed to establish any concrete links. Maybe Facebook is simply looking to expand, and the site’s live events are going to reach out to genres besides its own.

WWDC 2020 keynote: iOS 14, Macs with iPad chips, and everything else announced

Apple’s next big event is minutes away: Here’s what you can expect