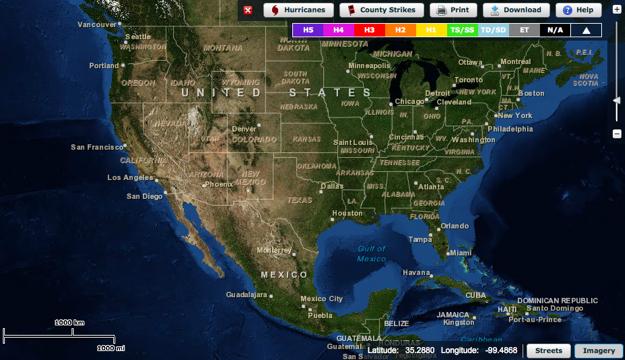 If you’re the kind of person who finds shows like Discovery Channel’s Storm Chasers a little too much, and finds themselves thinking about all of the potential hurricanes that could touch down near them (Hi, Erika), then you’ll be happy to know that there is, as the ad says, an app for that. Specificially, an app from the National Oceanic and Atmospheric Administration that’ll let you know where all the earlier hurricanes have been.

“We feel that it’s important for people to understand where hurricanes have hit in the past, to give an idea of where they might touch down in the future,” NOAA communications director Donna McCaskill told Talking Points Memo when explaining the organization’s new Historical Hurricane Tracks app. The app, which allows users access to data about tropical cyclones all over the world, is actually an updated version of technology that’s been around – and in use – for almost a decade, now updated and made available to the general public.

According to geographic information system developer and contractor at NOAA’s Coastal Services Center Jen Boulware, who’s been working on the app for the last nine years, “one of the bigger changes we made in this version was moving from just Atlantic storms to international data.” The new generation of the web app means that you can input a city name (or even specific zip code within the US) and see a map of the area, complete with the passage of any and all hurricanes that have traveled through that area in the last 150 years. Hurricane paths are delineated in colored lines that show their intensity, from Category One (yellow) through Category Five (purple), with each path offering details on the date of when it hit ground and, if clicked upon, information from the NOAA archive about the hurricane’s speeds and pressure throughout its journey on land.

Other features on the app include “access to storm reports written by hurricane specialists at the National Hurricane Center,” with reports being made available for both the Atlantic and East-Central Pacific Basins, as well as the chance to build custom URLs to enable users tracking specific information (So that “users can follow… specific storm tracks,” apparently; I find this kind of wonderful, the idea that people could build fansites for one particular storm track being something that seems so weirdly specific that it really appeals to me).

There is, however, one problem with this app: Namely, that it’s not really an “app” as much as a website; it’s based online, and runs on Flash, which means that Apple products such as iPhones or iPads can’t access it at all. Clearly, what the world needs – or, at least, we do – is a true app version that can be used anywhere in the world on any device, to let us know if and when hurricanes are en route and we need to make a last-minute run for it.