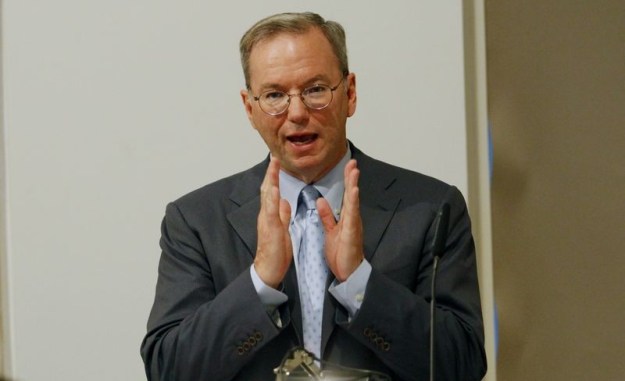 Google chairman Eric Schmidt has landed back in Beijing after a controversial and somewhat mysterious trip to North Korea.

At a press conference on Thursday (local time), Schmidt said he had urged the secretive state’s authorities to become more open and give its citizens freedom to use the Internet or face continued hardship.

“As the world is becoming increasingly connected, their decision to be virtually isolated is very much going to affect their physical world, their economic growth and so forth,” the Google chairman told reporters at Beijing airport.

He added, “It will make it harder for them to catch up economically. We made that alternative very, very clear. The government has to do something. It has to make it possible for the people to use the Internet. It is their choice now. It is, in my view, time for them to start or else they will remain behind.”

In a country of 25 million, only a few thousand are thought to have access to the Internet.

The likelihood of the regime opening up seems remote, with former state department spokesman PJ Crowley saying recently that the rulers simply won’t allow it. “If Pyongyang loses its control over information, the regime is doomed,” he told the Guardian. “The moment the average North Korean understands the gap between their lives and South Koreans’, the game is over.”

Schmidt’s visit was said to be in a private capacity and not part of any long-term Google plan to establish some form of presence in the closed nation. It’s been suggested he may have been gathering material for his book, The New Digital Age, due to be published in a couple of months. Co-author and director of the Google Ideas think tank Jared Cohen was also part of the delegation, which was shown around a number of technology facilities during the visit.

The pair went along at the invitation of former New Mexico governor Bill Richardson, who described the trip as a humanitarian mission.

Richardson told reporters that while in North Korea his delegation pressed the authorities to suspend its controversial missile launches, and also sought information about the condition of US citizen Kenneth Bae, who has been held in the country on unspecified charges since last month.

The US State Department described Richardson’s decision to visit as “unhelpful” as Obama’s government seeks to find an effective way of dealing with a nation it fears is developing a long-range nuclear missile.

The best Google Chrome extensions
Walk the Great Wall of China in Google’s latest virtual tour
Sustainable with Google 2021: Nest Renew, traffic light efficiency, and more
Google Meet vs. Zoom
How to save a webpage as a PDF
How to download music from YouTube
How to find archived emails in Gmail and return them to your inbox
How to sync your Outlook Calendar with your Google Calendar
How to block an email address in Gmail
How to easily log in to multiple Gmail accounts at once
How to change your Yahoo password
How to download Vimeo videos to your PC and phone
Kaspersky VPN should be your go-to for secure connections and privacy