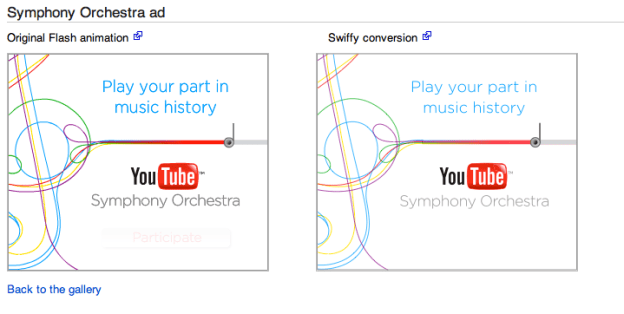 Google Labs on Tuesday launched an experimental product that promises to convert .SWF files into HMTL5, making formerly-Flash files compatible with mobile devices that include Apple’s iPad and iPhone. The web-based tool, dubbed Swiffy, won’t convert pages that have .SWF embedded, rather individual Flash files must be uploaded to the site and Swiffy then spits out the HTML5 code. That makes the Swiffy more suited for developers rather than for anyone with an iPhone trying to watch a flash animation.

Swiffy, as the story goes, is the result of a Google intern “hacking around” last summer in an attempt to make Flash animations playable on mobile devices that don’t support Adobe’s Flash Player (Google didn’t explicitly say it, but we guess that Apple devices were targeted devices).

In March, Adobe unveiled its own Flash-to-HTML5 conversion program called Wallaby. Wallaby, unlike Swiffy, which is web-based, required users to download a piece of software before they could run conversions. Google also notes that Wallaby’s converted product is able to be edited and reused whereas Swiffy produces a compressed format that can’t be easily edited. But that also means that Swiffy’s output file is only about 10 percent larger than the original .SWF file.

What does Adobe think of a third-party tool to convert its Flash files into HTML5? Google answered that very question:

“Adobe is pleased to see the Flash platform extended to devices which don’t support the Flash player. The result is that anyone creating rich or interactive ads can continue to get all the authoring benefits of Flash Pro and have the flexibility to run the ad in the Flash Player or HTML depending on what’s available on the system. Google and Adobe look forward to close collaboration around efforts like these.”

Google notes that Swiffy is still in its early stages and won’t necessarily work with all .SWF content, but should work nicely on Flash ads and animations. Swiffy is currently compatible with Webkit-based browsers: Safari, Mobile Safari and Chrome.