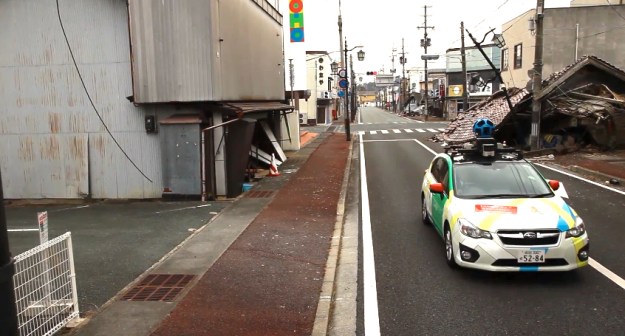 The mayor of a town evacuated after the meltdown at the Fukushima nuclear plant two years ago has asked Google to map the area for Street View.

Namie, located just miles from the damaged facility, once had a population of 21,000. Now, police barricades and checkpoints outside the town ensure that no one can return, with dangerously high levels of radiation contamination still affecting much of the area.

In the days following the magnitude-9 earthquake and resulting tsunami that struck the north-eastern part of the country in March 2011, Namie was evacuated when the government realized there would be no quick end to the escalating problems at the nuclear plant.

Though the powerful quake caused some damage to buildings in the town, much of Namie remains intact. But with no one to keep Mother Nature at bay, the landscape is steadily changing.

After receiving requests from displaced residents, Mayor Tamotsu Baba approached Google with the idea of mapping Namie for Street View.

“By photographing the town and making those photographs publicly available, we can show the townspeople the condition of the streets,” Tamotsu Baba said. “In addition, I want to show the world the true state of Namie.”

Google agreed to cooperate and, after gaining special permission to enter the exclusion zone, began photographing the town with its Street View cameras. It’ll likely take several weeks for the whole area to be mapped, with the web giant planning to get the images online in the coming months.

The frustrated mayor said that recovery work in the town is yet to start, with efforts to decontaminate the area still on hold. It’s thought it could be at least 10 years before residents wishing to return will be able to do so.

This isn’t the first involvement Google has had in the aftermath of the 2011 quake and tsunami. Nine months after it struck, its Street View cars helped to build a database of before/after images from the devastated areas.

“When looking at images of the magnificent cities side-by-side with images of the ruins left in their place, this additional context demonstrates how truly life-changing this tragedy has been for those who live there and witnessed the destruction of their homes, neighborhoods and even entire districts,” Kei Kawai, Street View’s senior product manager, said at the time.

He added that the Mountain View company hoped the archiving of images from the affected areas would help researchers studying the effects of natural disasters, and said the street-level images would “put the plight of these communities into perspective and ensure that the memories of the disaster remain relevant and tangible for future generations.”

Your digital fingerprint is tracked everywhere online. Brave wants to change that
Google deploys a Jaguar I-Pace as its first all-electric Street View car
We can all explore Zimbabwe on Google Maps Street View, thanks to one person
How to use Google Meet
How to find archived emails in Gmail and return them to your inbox
How to sync your Outlook Calendar with your Google Calendar
How to block an email address in Gmail
How to easily log in to multiple Gmail accounts at once
How to change your Yahoo password
How to download Vimeo videos to your PC and phone
Kaspersky VPN should be your go-to for secure connections and privacy
Here are two awesome Santa trackers that kids can use today
Install these Chrome extensions on your relative’s new laptop