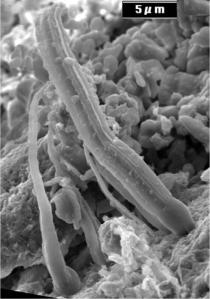 A newly published study claiming evidence of alien life is most likely incorrect, say NASA and its top scientists.

This past weekend, the Journal of Cosmology published a study by Richard Hoover, a researcher at NASA’s Marshall Space Flight Center in Huntsville, Alabama, which claimed that fossils in a rare meteorite were made by extraterrestrial bacteria. The story became one of the most read news pieces online early this week. But according to the Associated Press, many scientists say that the study, Hoover and the Journal of Cosmology should not be believed.

“There’s a lot of stuff there, but not a lot of science,” Rosie Redfield, a microbiologist at the University of British Columbia who closely reviewed Hoover’s study, tells the AP. “I looked at it and shuddered.”

Rather than being made by micro-organisms from outer space, the holes in the meteorite found by Hoover — who has made similar claims twice in the past — were probably made by Earth-born bacteria, say biologists. And despite assertions by Cosmology’s editor-in-chief, Harvard astronomer Rudy Schild, that “no other paper in the history of science has undergone such a thorough vetting,” many scientists say the study was not actually peer-reviewed.

“We thought the purpose of the exercise here is having it released and having it discussed,” Schild told the AP in an interview. The Journal of Cosmology announced earlier this year that it will soon shut down, which, Schild says, was “a factor in play” in deciding to publish Hoover’s findings.

Harry “Hap” McSween, one of the world’s leading experts in meteorites, further asserted that at least one of the three meteorites Hoover used as evidence — specifically one that landed in France in 1864 — had been improperly stored, and had noticeable contamination.

“I don’t think anybody [in the scientific community] accepts this idea,” said McSween. “Nobody thinks they are extraterrestrial.”

This is not the first time publicly-presented evidence of extraterrestrials has been shot down by the scientific community. In 1996, President Bill Clinton announced a study at the White House that claimed that a Mars meteorite contained proof of alien life. That study has since been shown to be incorrect by many scientists.

So how did this story, which was a top read on Yahoo News and FoxNews.com —where the story was originally reported — gain so much popularity?

How NASA’s Perseverance Rover will search for life on Mars

The end of life for Adobe's Flash software nears, but don't expect a swift death