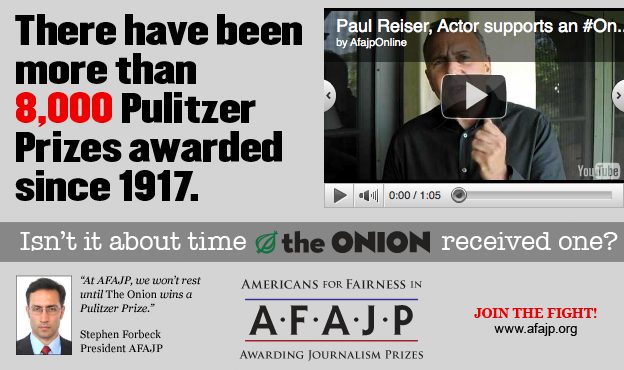 Satirical news publication The Onion is making a serious (as serious as The Onion gets anyways) push to win the coveted Pulitzer Prize this year — and it’s not going it alone this time around. The Onion has the backing of a cadre of celebrities who have given their support via a series of YouTube videos touting the merits of the publication, and in a number of cases, questioning the judgement of the Pulitzer board.

Actors, comedians and the unemployed have all recorded testimonials posted on YouTube making the case that The Onion is past due to be recognized for its contributions to American journalism excellence. Actor Tom Hanks says that he finds it “truly odd that The Onion has yet to be honored by whoever it is that awards the Pulitzer prize.” And public radio host Ira Glass vents his frustrations over The Onions snub in an uncharacteristically profanity-laced video.

It’s not the first time The Onion has made a push to win journalism’s highest honor. Its editors have previously nominated The Onion for Pulitzers in several categories, including commentary and even public service, but to no avail; “America’s Finest News Service” thus far remains Pulitzer-less. Something its editors hope to change in the near future.

Supporting Tom Hanks and Ira Glass is the Americans for Fairness in Awarding Journalism Prizes (AFAJP), a “non-profit watchdog group dedicated to exposing those who engage in improper award-giving.” The group has dedicated its Tumblr blog to cataloging the various YouTube testimonials that have come out in support of The Onion‘s quest for bonafide journalism excellence.

The Onion is also asking the public to make and post videos using the #OnionPulitzer hashtag. The multimedia effort for the Pulitzer is said to mark the the paper’s 1,000 issue — maybe. The Onion’s editors profess that they aren’t exactly sure how many issues they’ve published during the paper’s twenty three-year history. Either way, they feel it’s high time their newspaper was recognized by the Pulitzer committee.

How to try YouTube’s new video download feature for desktop