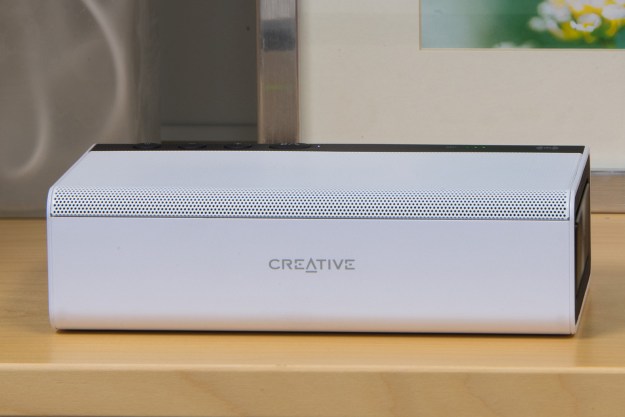 “The Roar 2 packs the same growl as the original, but looks better after dieting for a few months.”

Creative wasted no time in trimming down its original Sound Blaster Roar Bluetooth speaker, a product from earlier this year that we considered among the most unique we’ve tested. The Roar 2 has slimmed its figure down, looking a little less voluptuous than its predecessor, and yet it still wears all the same hats.

The Sound Blaster Roar 2 carries on in namesake tradition, playing loud and proud while offering the same additional features that made the original such a versatile standout. Does the slimmer waistline still mean this speaker can belt out tunes with the same fiery performance as the weightier original?

Yep, and without missing a beat.

Unboxing the Roar 2 was like experiencing déjà vu. The packaging inside was virtually identical to that of the original Roar. Save for the smaller speaker and a different manual, there was nothing different going on here. Even the charger and micro-USB cable were exactly the same. Right out of the box, we started charging the Roar 2 with the previous model’s power adapter.

We liked the instruction manual, particularly because it was kind of like finding Easter eggs on an app or Blu-ray disc. Usability tips and tricks the Roar 2 can manage were neatly pointed out throughout the short manual, making it easy to try these settings once we were up and running.

Some subtle differences do make the Roar 2 different. There are now two color schemes — one white, one black. Creative reversed the order of the layout on the rubberized strip at the top for reasons that aren’t especially clear to us. The sides more visibly indicate the passive radiators that are part of the five drivers nestled into the smaller chassis. Part of this appears to be purely aesthetic, since they pulsate with the bass, whereas the classic Roar had hardened grilles on the side.

Despite a 20 percent smaller body, the same components have been tucked inside.

The front has a Creative logo that isn’t embossed like the original was, and the panel is also flat with no perforated holes. Instead, the grilles only cover the top, with a slight overlap onto the fold toward the front. Doing this has practical implications: Laying it flat offers more spatial coverage, whereas propping it up offers more direct audio with better access to the buttons.

The back features the same exact inputs as before, save for some minor adjustments. The weird alarm Creative threw in with the classic Roar is gone, having been replaced with a much more useful switch to toggle between USB audio and USB mass storage when slotting in a microSD card.

Despite a 20 percent smaller body, the same components have been tucked inside, so there is nothing uniquely different about the subwoofer and stereo amps. The idea is that the Roar 2 can pump the same sound out of a smaller frame — like an opera singer who shed a few pounds but still hits the same notes.

Being thinner and shorter also means getting lighter. At 2.2 pounds, the Roar 2 is only 0.3 pounds less than its fatter sibling, but the disparity felt greater once we held one in each hand. Even with its reduced form factor, the Roar 2 isn’t the most portable Bluetooth speaker, but it doesn’t have to be when it packs in everything it has.

Bluetooth pairing, especially with NFC, is as easy as it was before. Two devices can be connected simultaneously, so that playback can begin with one and continue with another. We liked this for collaborative playlists with friends, so that more than one person could play what they wanted.

It wasn’t hard to guess how the Roar 2 would sound. With the same components, audio quality wasn’t going to take a leap forward or step backward. Still, in this case, being predictable is a good thing. The original Roar impressed us by blasting music at the highest volumes for its size, although a little distortion crept in when we pushed it that far. The same is true here, yet again, and once more we’re impressed at those volumes, in spite of a smaller frame.

In fact, we tested it with exactly the same tracks we noted when reviewing the classic Roar, and then kept the speaker going. The Roar and Tera Bass buttons are back, though Creative decided to merge them into one button. Pressing it once turns Tera Bass on — twice and Roar roars into action. Both of these don’t offer any surprises compared to the original Roar. Tera Bass comes in handy for bass-heavy tracks that aren’t pumped at full blast (or close enough). The Roar effect is really only necessary at parties or for large groups people in a big room.

The same trade-offs apply, too. The Roar 2 doesn’t do anything to improve on the original’s tendency to overtake the lows with more pronounced mids and highs. At the highest volumes, any warmth within the audio spectrum is progressively lost, turning the speaker into a blaring box. In that, however, is an opportunity the Roar 2 does improve on. The smaller form factor makes this a more portable product, and as such, more ideal for locales that don’t need the speaker turned up to 11. Despite its name, this speaker is at its best when it isn’t pushing itself to make noise.

Proximity was also no surprise. The original Roar was in an enviable position in that its shortcomings weren’t noticeable at a distance. It was when really up close that all the artifacts and imperfections grew evident. The Roar 2 doesn’t hold back, either, offering the same listening experience from start to finish.

More than just a simple Bluetooth speaker, the classic Roar surprised us with the bevy of interesting features it offered out of the box, and the Roar 2 follows suit. It can act as an audio recorder and speakerphone, for example, as well as a DAC (digital audio converter) when connected to a computer. Recording audio is fine for interviews or phone calls, but is pointless for music because it maxes out at a terribly low 64kbps bitrate.

It’s rated for eight hours, but that’s not going to happen once the volume goes up.

The DAC is an interesting way to amplify and improve audio quality from a PC or Mac, though we found it to be more useful for gaming or watching content on a big all-in-one desktop. The free Sound Blaster Control Panel software maintains the same equalizer controls as in the first model, which can give the Roar 2 a little more precision.

The USB port can charge a smartphone but can’t play audio from one connected to it. It’s also still a 1amp output, so tablets only get a slow trickle charge. But regardless of what mobile device you plug in, it will charge even when the speaker is off. The Aux-In jack offers another way to play with an old school 3.5mm cable. Playing music straight off a memory card is yet another way to go, though without a screen to navigate through a big list, it feels primitive and clunky, similar to how car audio decks first supported MP3s burned to CDs. For longer playlists that don’t need a DJ to manage, this is a cool feature, but not one we clamored for.

Creative packed in the same size battery here, with predictable results. While eight hours is the rated lifespan per charge, that’s not going to happen once the volume goes up. We noted the exact same six-hour range we had with the classic Roar.

The best way to look at the Roar 2 is to simply consider it the same as the original Roar, albeit looking better after dieting for a few months. (Maybe it should have been called Roar 1.5?) Some cosmetic changes give it a slight makeover, but it’s what’s inside that counts, and this speaker packs the same guts. We’re not complaining about that, since we found its predecessor so interesting, but we can’t help but feel Creative could’ve made things really interesting by nipping and tucking on the components inside as well, to possibly impact fidelity.

We also can’t argue with the price. At $170 direct from Creative ($200 everywhere else), it’s cheaper than a number of other Bluetooth speakers that either don’t sound as good, or don’t offer anything beyond simple music playback and speakerphone. Even if you don’t care too much about the ancillary features, you may come to need them sometime. The Roar 2 scratches that itch, and then some.