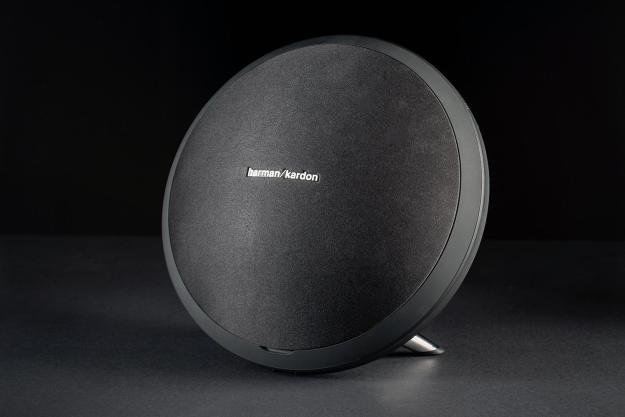 If you’ve got a funny feeling you may have seen Harman Kardon’s new Onyx Studio Bluetooth speaker before, it’s not Déjà vu. The minimalist saucer of sound is a scaled-down evolution of H/K’s original Onyx speaker, which debuted last September. Part of a surprising new partnership between H/K and Sprint, the Studio trades the original Onyx’s Saturn-esque halo stand for a more utilitarian, dual-pronged design. It also cuts out Airplay and DLNA wireless support, as well as an Aux input, leaving Bluetooth as its sole source.

The result of the Onyx Studio’s slimming-down from its feature-rich predecessor is a slimmer price point, though the speaker still runs a rather hefty $400 at Sprint retail locations. For that price, the Onyx Studio offers powerful sound, five hours of portability, and a sexy form factor that looks good nearly anywhere – from the kitchen counter to the mantle. While not without its shortcomings, the speaker is a capable sonic companion that’s sure to impress guests with its chic aesthetic. Follow us below to see if HK’s latest audio offering is right for you.

Updated 9/25/14: The Onyx Studio is an excellent speaker at $400, if not a bit spendy. However, the speaker is now available for a screaming deal, priced at just $200 on Amazon. At that price, this stylish and capable dish of sound is pretty much a no brainer.

Minimalism was the pronounced theme as we pulled the Onyx Studio from its box. A stout, all black dish, the speaker boasts a solid frame and a premium feel thanks to the smooth, rubberized material that runs along the bulk of its exterior. The passive radiator layered in sparkling chrome at the center of the speaker’s rear immediately drew our eye, mirroring the backside of H/K’s Nova speaker set.

Also at the back we discovered a succinct input panel bearing only a power port and a micro-USB port, both residing just above the speaker’s stumpy chrome legs. After spinning the disc back around, a knock on its hard plastic speaker screen revealed a sturdy guard for the speakers beneath.

After digging around in the Studio’s box for a moment, we discovered a pretty thin selection of accessories: a power supply and cable, and a packet of instructions.

To say this speaker is designed with simplicity in mind would be a gross understatement.

While previewing the H/K Onyx’s striking satellite dish form-factor, you might think it’s pretty unique, but we’ve seen this movie before, with similar designs offered by both Bang & Olufsen’s BeoPlay A9, and the furry-faced Libratone Loop. Still, the Onyx Studio is a gorgeous take on the blooming trend, and we love both the look and feel of this succinct little pod.

To say this speaker is designed with simplicity in mind would be a gross understatement.

The speaker is relatively easy to cart around thanks to a convenient handle carved into its back, though it’s a little too heavy for carrying long distances. Ostensibly, the speaker is meant to be plugged in for daily use, but it does offer a rechargeable battery for up to five hours of wireless playback. The speaker stretches 11-inches in diameter, and measures just over 6-inches deep, and 10-inches high.

The Onyx Studio’s minimalist approach extends to both form and function. Since this device only offers one way to play, there aren’t a whole lot of extra cables or controls to deal with. As for control, the speaker has four buttons sprinkled along its rubberized circumference, including one for volume, power, and Bluetooth pairing.

For playback, the speaker supports the slightly less efficient Bluetooth version 3.0, which likely cuts into its battery life a bit. We were also a little disappointed to discover the speaker can only pair with one device at a time, which can be a bit of a hassle if your music collection is spread across your mobile device arsenal, or if more than one person wants to play DJ.

Prying the speaker screen from the front face reveals an attractive configuration of drivers, including dual 3-inch midrange drivers, dual ¾-inch tweeters – each powered by its own 15-watt channel of digital amplification – and at the top center, a second passive radiator. Harman Kardon claims a frequency response of 60Hz-20kHz, a claim which held up well in our testing, thanks in part to the Onyx Studio’s dual passive-radiator design.

This thing sounds BIG for its size. and while we basically enjoyed its performance throughout the frequency spectrum, the bass response was especially striking. It’s just not that common to hear bass that’s smooth and full from a unit this size, but H/K seems to have squeezed every ounce of performance possible from its dual passive-radiator setup.

It’s just not that common to hear bass that’s full, smooth, and powerful from a unit this size.

Also striking was the upper register, which brought home the blue ribbon when it came to accuracy and presence for the speaker. Cymbals, high frequency synths, and string attacks were all well-struck, with plenty of presence and detail, yet rarely leaned into the sharp bite that can be a pitfall for speakers that strive for precision in the treble.

Midrange instruments like vocals, acoustic guitars, and horns displayed the kind of warmer resonance that sits right with our ears, and the speaker did a good job of blending the thinner treble with the more mellow meat of the midrange. However, we missed some detail in the midrange instruments – the Onyx came up short of what we’d call hi-fi sound here. It wasn’t something that was overt when listening casually, but there was a loss of definition in more ancillary instrumental tracks, from the refined effects in Radiohead’s “Subteranean Homesick Alien,” to the richer textures of the slide guitar solo in Ray LaMontagne’s “For the Summer.”

Of course – and this isn’t surprising for a speaker of this design – there was also almost no stereo separation to be heard, which likely contributed to some of the muddled up sound we heard earlier.

We also felt bass response could get a little muddy when it was called to keep nimble. This is probably attributable to the use of passive, rather than powered bass drivers. Still, the bass made itself known, and some of our favorite sonic moments came while listening to hip-hop tunes like Snoop Dogg’s “Gin and Juice.” The speaker reproduced all of the track’s percussion loops with tight, rounded resonance, and the bass was big and boisterous, with little to no distortion or speaker vibration.

Harman Kardon’s Onyx Studio offers powerful portable sound that performs admirably across multiple genres, moves easily to any room, and looks damn good doing it. It’s pretty pricey for how few features it offers, and it falls a little shy of full-on high fidelity. But if you’re looking for a speaker with a striking design and big sound that can post up anywhere with ease, this little saucer is an enticing choice.

Ultimate surround sound guide: DTS, Dolby Atmos, and more explained
Apple AirPlay 2: Here’s everything you need to know
How much is Apple Music, and how can you get it for free?
MLS Season Pass will cost $15 a month on Apple TV
You can get an Apple TV for $59 for Cyber Monday if you’re quick
Cyber Monday: This Samsung 85-inch TV just got a massive price cut
65-inch Sony OLED TV is $700 off for Cyber Monday, and it’s selling fast
Perfect for a bedroom or kitchen, this 32-inch TV is $108 for Cyber Monday
Get these Sony wireless noise-canceling headphones for $68 today
Walmart has a Bluetooth speaker for $39 in its Cyber Monday deals
Amazon’s superb Echo Studio speaker is just $155 for Cyber Monday
Save $1,000 on this 85-inch Sony Bravia 4K TV for Cyber Monday
Cyber Monday Deal: Samsung’s Freestyle Portable Projector is $300 off