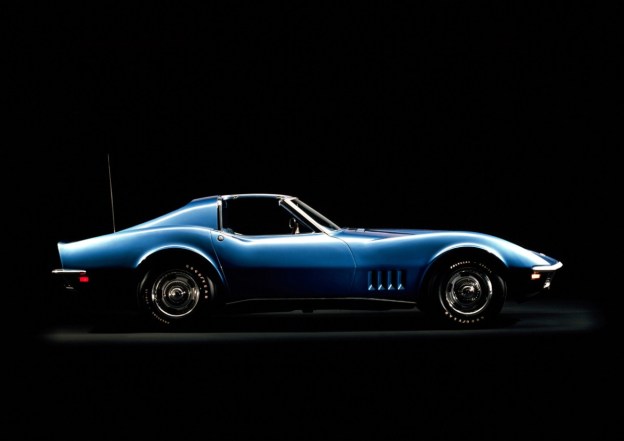 The seventh-generation Corvette, known as C7 to its close friends, will be unveiled in Detroit on January 13, and it’s a momentous occasion for even fair-weather gearheads. After 60 years of continuous production, the ‘Vette has earned the title “America’s sports car,” but why? What has kept the Corvette going all these years? What makes a Corvette a Corvette?

At its most elemental, the Corvette is a two-seat sports car made by Chevrolet. While serving in Europe during WWII, a generation of Americans were exposed to nimble sports cars like the MG TD, and when they came home, Chevy was more than happy to give them an American version.

What Chevy came up with in 1952 was a fiberglass-bodied sports car with the engine set as close to the firewall as possible, for better weight distribution. Chevy’s only engine at the time was the “Blue Flame” inline-six, which produced an underwhelming 150 horsepower. Luckily, European sports cars prioritized handling over raw power.

Fittingly, Chevy named its sports car after a type of warship that served as a fast, agile convoy escort in both World Wars.

Today’s Corvette has little in common with an MG. That’s because it has evolved into a uniquely American sports car. The inline-six was ditched almost immediately for a V8 (more on that in a minute), and the Corvette grew in both size and capability.

It just wouldn’t be a Corvette without Chevy’s small-block V8, which has been in continuous production since 1955. That first small-block displaced 4.3 liters and produced 195 hp. The small-block in a 2012 Corvette ZR1 displaces 6.2 liters, and produces 638 hp.

Like the rest of the Corvette, the small-block has constantly evolved over the years. The only things a 2012 small-block shares with the 1955 original are a 4.4-inch bore spacing, 90-degree V angle, and pushrods.

Still, even constant refinement isn’t always enough. The small-block’s lack of efficiency-boosting overhead camshafts, along with its large displacement, have led some to consider replacing it with everything from a Wankel rotary engine to a twin-turbo V6.

The C7’s LT1 engine is still a pushrod small-block, but it stays relevant with new-to-Corvette technologies, including: direct injection, variable valve timing, and a cylinder cutoff system that allows this 6.2-liter V8 to operate as a 3.1-liter V4 under light loads.

Jeremy Clarkson likes to call the Corvette a “plastic car,” and he’s technically correct. The first Corvette had a body made of glass-reinforced plastic (fiberglass), and ‘Vettes have eschewed metal bodywork ever since. It’s a great way to keep this sports car from gaining weight without jacking up the price.

Base versions of the current C6 Corvette still have fiberglass body panels, while the more expensive ZR1 has a carbon fiber hood, roof, front splitter, and rocker moldings to further trim weight.

Saying your car is made of boat-building materials isn’t the best way to get street cred, but C7 owners may not have to worry about that. We’ll have to wait for the C7’s Detroit debut to confirm this, but it is very likely that the new ‘Vette will have carbon fiber body panels.

It’s no use having a great sports car if no one knows what it is. The first generation (C1) Corvettes had a distinct look, but today’s ‘Vette is most influenced by the design of the 1960s “Stingray” models. The 1963-67 model introduced styling cues, like the fastback roofline and four round taillights, that are still apparent on the C6. Its 1968 replacement lasted until 1982, a long life for any design.

Since then, Corvette styling changes have been so subtle that, in the case of the C5-C6 transition, some critics complained that Chevy’s designers had pulled a Porsche and not actually changed anything.

Major styling changes are unusual, but it’s not like the Corvette is a bad-looking car. Like the 911, the Corvette has maintained a distinctive look over many decades. That’s why one of the biggest changes expected for the C7 will be the taillights: they’ll be square, not round.

Big engines and lightweight bodywork are great, but they’re even better when they don’t break the bank. The Corvette is, after all, a Chevy, so it has always been a relative bargain compared to sports cars from premium brands.

Of course, even cheapness has a price. Corvettes are infamous for their rental car-grade interiors, and you’ll never see anything like Porsche’s PDK double-clutch transmission in a car with a Chevrolet badge. A Corvette will never be as refined as a 458, either.

Still, for buyers looking for performance and nothing else, the Corvette is a compelling bargain. With an expected base price of around $55,000, the C7 should be the same.