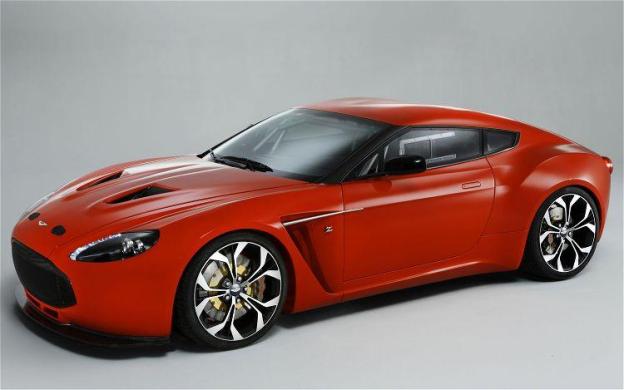 The Aston Martin V12 Zagato is a gorgeous car. Its streamlined nose, voluptuous flanks, and torpedo-like taillights put it at the peak of automotive styling. It’s also fairly unnecessary: the stock V12 Vantage it’s based on is already a good looking thing, so why did Aston’s own designers hand it off to Italy’s Zagato styling house?

It is part of a legacy that goes back 50 years, when Aston Martin and Zagato collaborated on the now-classic DB4GT Zagato. Aston isn’t the only car company to turn to Zagato, either, and Zagato isn’t the only Italian styling house.

Italy is where these unique automotive enterprises, part industrial firm, part custom car shop, part laboratory, thrive. Firms like Zagato, Pininfarina, Italdesign Guigiaro, Bertone, and Ghia have left there mark in the sheetmetal of countless cars, from one-off concepts to humble hatchbacks. They aren’t car companies, but they have built a lot of cars.

Today, styling is an integral part of every car’s design, but it was not always that way. Before World War II, aerodynamics was a still a dark art, and safety regulations that would later dictate the shape of cars were unheard of. Carmakers simply had nothing to gain by employing their own stylists.

However, when carmakers decided to go racing, they found out just how important the shape of a body was. Streamlined shapes clearly went faster, so builders sought third-party firms to clothe their chassis in sleeker sheetmetal. Custom-bodied cars were common up to the 1930s, often built by the same people who made horse-drawn carriages.

Zagato didn’t build buggies, though. Founded in 1919 by Ugo Zagato, it made a reputation building lightweight cars using techniques Ugo learned at the Pomilio aircraft works during World War I.

The result were lithe racecars like the Alfa Romeo 6C 1500 and 1750. Soon, other firms joined in. Touring Superleggera, whose name means “touring super-light” in Italian, crafted the beautiful Alfa 8C 2900 in 1937.

World War II obviously put a stop to racing and using high tech aircraft construction techniques on any other than aircraft. After the war, the Italian car industry was literally in ruins, but there was a postwar boom ahead.

Global war had whetted the collective appetite for new cars, and companies were looking for designs that looked eye-catching and modern. Lightweight racing bodies were still important, but now the suits also wanted cars that would stand apart from the competition and connote technological advancement with their styling alone.

Battista “Pinin” Farina started his company, which became known simply as Pininfarina, in 1930, but he didn’t have his first real hit until 1947. The Cisitalia 202 was so beautiful it became part of the New York Museum of Modern Art’s permanent collection, and Pininfarina went on to become the design house for the biggest Italian name in the business: Ferrari.

The Cisitalia was a pure sports car, with an aerodynamic body that eschewed the traditional “three-box” profile for a flowing form. But Pininfarina, and other Italian styling houses, wouldn’t limit their work to racers.

Pininfarina redesigned the Nash-Healey, an American-British sports car collaboration, and built the bodies. Ghia dropped some new sheetmetal onto a Volkswagen Beetle chassis to create the iconic Kharman-Ghia. Neither car was really sporty, but they both looked good.

The real performance cars kept coming, too. Touring Superleggera produced everything from the 1952 Alfa Romeo Disco Volante (“flying saucer”) to the very angular, and very British, Jensen Interceptor. Bertone turned out the most iconic supercar of the ‘70s, the Lamborghini Countach, and nearly every Ferrari made has worn a Pininfarina badge on its flanks.

The Italian styling houses have also produced some amazing concept cars over the years. Bertone’s BAT cars, built for Alfa Romeo in the late 1950s, couldn’t have had more appropriate names. BAT was actually an acronym for “Berlinetta Aerodinamica Tecnica,” which translates roughly as “aerodynamic technology coupe,” but the cars looked like they would’ve been at home in a certain Gotham City cave.

Designing concept cars also allowed these Italian designers to envision new types of cars when they were desperately needed. At the beginning of the 1980s, fuel economy standards were shrinking cars, but buyers still wanted the cavernous interiors they were used to.

To solve this problem, Volkswagen released the Golf Mark I, a boxy hatchback with a transversely mounted engine and front-wheel drive for maximum space efficiency. The Golf became the template for the modern economy car, and its shape was penned by Italdesign.

In fact, not every car to come out of an Italian styling house has been a racer or a fantastic concept. In addition to the Golf, Italdesign also shaped the humble Fiat Uno, Isuzu Gemini, and Hyundai Stellar, while Pininfarina penned the pint-sized Peugeot 205.

The caché of Italian styling is a great selling point, especially when it comes to decidedly un-stylish econoboxes, but car companies know how to design cars too. They understand the importance of styling (why else would they turn to the Italians?), and corporate designers like Kia’s Peter Schreyer, are practically celebrities. So do car companies need to outsource their styling anymore?

The answer seems to be “yes.” Unconstrained by cost, these independent designers occasionally outdo the carmakers. The 2005 Ford Mustang was lauded for its retro styling, but Italdesign’s version is much more dramatic. The same goes for Pininfarina’s Ferrari P4/5, which blends an Enzo chassis with 1960s racecar styling.

The Italians still turn out many of their own concepts as well. The Bertone Nuccio, named after company founder Giovanni Bertone’s son, is a fully-functional dream car with outrageous styling, and the Pininfarina Cambiano could be a rival for the Fisker Karma if it ever goes into production.

Still, styling has its limits. Pininfarina, Bertone, and company still know how to produce great looking cars, but the process of car design has become much more complicated.

New Ferraris like the F12berlinetta may look every bit as good as the classics, but that is pure coincidence. Every crease and duct is there, not to make the car look better, but to make it cut through the air more efficiently.

That’s why Ferrari’s next big undertaking, the F70 hybrid supercar, will be designed and built without any input from Pininfarina. This time, Ferrari’s engineers know more about aerodynamics and the eccentricities of carbon fiber than Pininfarina’s designers.

The way a car looks has always been dependent on both aesthetics and engineering, and which wins out in a given design depends on what that car’s mission is. The Italian styling houses have played both sides fairly well in the past, so there’s no reason why they shouldn’t be able to make the high-tech cars of the future beautiful.

The best commuter cars
The best cars for teens
Best car brands
The best BMWs of all time
Jeep is launching its first two electric SUVs in the U.S. in 2024
2024 Chevrolet Equinox EV aims for affordability with $30,000 base price
Cruise’s robot taxis head to Arizona and Texas
Uber says it’s investigating ‘cybersecurity incident’
Nvidia’s Drive Concierge will fill your car with screens
The Uber hack is an outrageous tale of a teen hacking for fun
Tesla to fix window software on 1M of its U.S. cars
Lux and refreshingly livable, Mercedes’ EQE moves EVs mainstream
How to watch Tesla’s AI Day tonight and what to expect