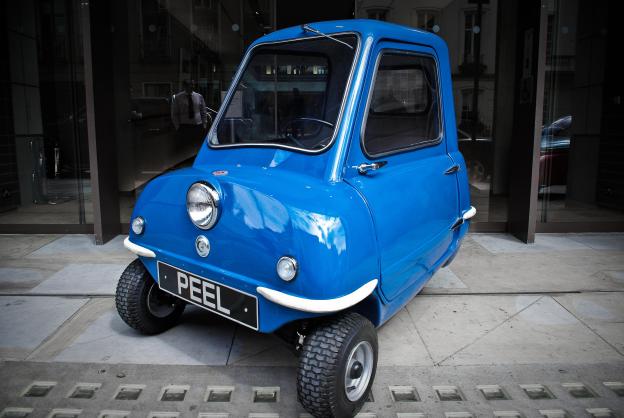 A Smart Fortwo seems like a small car. Upon first seeing one, many people think that it is unsafe, and wonder how it can keep up with traffic with only 70 horsepower. However, the Smart is not that small. It’s 106.1 inches long, but there is a car out there that is only 54 inches long. When the Peel P50 debuted in the 1962, it was the world’s smallest car, and it still is. A new company is putting this three-wheeled moped back into production.

Some futurists predict that people will give up their cars for more efficient personal transport pods, but we’ve already been there. One person can barely fit inside a P50 and, at 130 pounds, the car might weigh less than the driver. Despite being designed during the Kennedy Administration, the P50 does have some modern features. For example, it is mid-engined, just like a Ferrari 458. By “mid-engined,” the company means that the engine is in the cabin, alongside the driver.

The original engine as a 49cc moped unit, which made 4.2 horsepower. The new P50 (and its two-seater Trident sibling) uses a slightly less powerful, 3.35 hp engine. Luckily, the old car’s reverse-less three-speed transmission has been replaced with a modern CVT. Peel is also offering an electric version with the same power. The engine and transmission should be enough to get the P50 up to 28 mph. The top speed is electronically limited; clearly Peel needed to reign this beast in to keep its customers safe.

Safety is an important thing to consider, since a swarm of P50s can fit in a truck’s blind spots, and there is nothing to absorb the impact.

A car that can only go 28 mph does not seem very useful, but the Peel has some major advantages over normal-sized autos. It gets an estimated 118 mpg, without any batteries, electric motors, or regenerative braking. It makes the Peel EV’s 35 mile range seem kind of silly. No wonder Peel’s slogan has always been “almost cheaper than walking.” The P50 does makes a credible replacement for your own two feet, as Top Gear’s Jeremy Clarkson demonstrated when he drove one through offices and elevators at the BBC’s headquarters.

Now, lazy office workers everywhere can rejoice, because the Peel is back. The Isle of Man-based company stopped producing cars in 1969, but it has been reinvigorated by cash from the BBC business show Dragon’s Den. A new P50 will cost about $16,000, which is $2,500 more than the gargantuan Smart. An original Peel would have cost $2,200 in today’s money.

Other cars offer more amenities for the price, but you can’t park them in your living room. That will probably be enough of a reason for some people, especially if they already have a car. It will also make Smart drivers feel good, since their cars are like monster trucks compared to the P50.