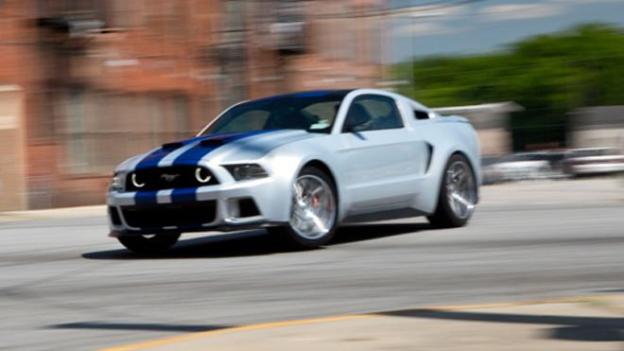 How fast do you dream of driving?

Well, Ford is betting on pretty fast as the automaker gears up for the new film Need for Speed by unveiling a one-of-a-kind Mustang to be featured in the flick.

The new Mustang, being showcased this week at the Electronic Arts Expo in Los Angeles, is part of Ford’s exclusive partnership for the film. The tie-in will also include other Ford product integration and extensive media promotion by the automaker for the Need for Speed release on March 14, in 2014.

Looking to garner some of the same iconic appeal of Mustangs featured in past films, the Need for Speed version of the iconic pony car features a custom-designed wide body, unique 22-inch alloy wheels, and larger air intakes to feed the supercharged V8 engine under its classic Mustang twin-nostril hood that generates 900 horsepower, according to a Ford press release.

“Need for Speed is rooted in Americana, and when we were casting our hero car for the film, Ford Mustang was the obvious choice,” said DreamWorks Studios’ Stacey Snider. “With its 50-year history in film, the iconic Mustang is the perfect co-star for Aaron Paul. We are privileged to have such an esteemed partner like Ford working with us on this film and look forward to seeing their Mustang up on the big screen next year.”

In addition to the one-of-a-kind Mustang, Ford also provided the Need for Speed production team with an F-450 truck known in the film as “The Beast,” as well as another Mustang to serve as a specially designed camera car, which allows the filmmakers to capture some of that cool car racing action in new ways.

The film, based on EA’s popular video game series, is described as a near-impossible cross-country journey that begins as a mission for revenge but winds up being a journey of redemption.

Jim Farley, executive vice president, global marketing, sales and service, Ford said the Need for Speed film is a perfect platform for connecting people with the true iconic essence of the Mustang, which will celebrate its 5oth birthday next year.

“Ford Mustang is a symbol of freedom and optimism that allows you to be the person you dream of being, making it the perfect fit for this story,” said Farley. “Ford is excited to partner with DreamWorks and Electronic Arts as they bring the epic gaming franchise of  Need For Speed to the big screen, allowing us to go further with them as they tell their great story on the global stage.”

Scott Waugh, director of the Need for Speed film, said the movie will be full of high speed racing action.

The Need for Speed movie will embody everything that fans of action racing films want to see – hot cars, high-stakes street racing and mind-blowing stunts,” said Waugh. “The adrenaline-fueled story across America will keep viewers on the edge of their seats.”

The Mustang’s starring role in the upcoming movie follows a long legacy of the car being prominently featured in films including the 2000 remake of Gone in Sixty Seconds and the 1968’s Bullit, starring Steve McQueen, which still reigns as one of the most talked about car buff movies.

Whether Need for Speed is capable of reaching that kind of status remains to be seen, but Ford definitely seems to be putting a lot of its power behind it – all 900 horses and more.

Volkswagen to cease all non-electric motor sports programs
The Bloodhound Land Speed Car saw its paint peel off in a 600-plus-mph test run
Ford transforms the Mustang into a rule-breaking, 900-horsepower EV
McLaren applies F1 tech to health care, air-traffic control, Wi-Fi, and athletics
Jeep is launching its first two electric SUVs in the U.S. in 2024
2024 Chevrolet Equinox EV aims for affordability with $30,000 base price
Cruise’s robot taxis head to Arizona and Texas
Uber says it’s investigating ‘cybersecurity incident’
Nvidia’s Drive Concierge will fill your car with screens
The Uber hack is an outrageous tale of a teen hacking for fun
Tesla to fix window software on 1M of its U.S. cars
Lux and refreshingly livable, Mercedes’ EQE moves EVs mainstream
How to watch Tesla’s AI Day tonight and what to expect