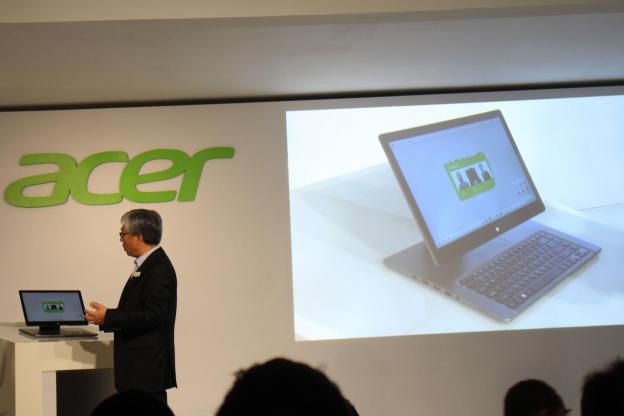 Check out our review of the Acer Aspire R7 hybrid all-in-one and tablet.

Acer has launched the Aspire R7 at a special event in New York, a gadget which is best described as a laptop/tablet/desktop convertible, which runs Windows 8. Introduced by Acer’s CEO JT Wang, who said touchscreen laptops are amazing, but can be rather awkward to use, it’s designed to give users the best of every popular form factor, without compromising usability.

For this reason, the design is very different to anything we’ve seen before. Made using an aluminum unibody construction, it folds down just like a laptop and the screen can be rotated to sit flat against the base like a convertible laptop; but the keyboard is where we’re used to seeing a trackpad – allowing the screen to stand up in the center of the base. It’s all done with a hinge Acer calls, “Ezel,”, and it brings the screen closer to you, making the touch aspect easier to use. Weirdly, there is a trackpad, but it has swapped places with the keyboard.

All this twisting and turning gives the Aspire R7 four possible configurations. Exel Mode has the screen at its closest to the user, enabling use of the touchscreen, keyboard and trackpad, and the screen can rest on the deck or float above it. Next is Notebook Mode, where the screen sits at the back of the base, just like a normal laptop.

Display Mode flips the screen around so the base acts like a stand, and the screen looks like a standalone monitor, which Acer says is great for watching videos. Finally, Pad Mode has the screen laying flat – or angled at a subtle four degrees – for using the R7 like a big tablet.

The complete spec list looks like this: It has a 15.6-inch, 1080p display, and is powered by an Intel Core i5 processor with 6GB of RAM. Inside is a 500GB hard drive backed up by a 24GB SSD, plus dotted around the chassis are three USB ports, an HDMI-out, and an SD card reader. Dolby Home Theater audio enhancements should make the most out of the four, 8-watt speakers, while Acer has placed dual microphones just beneath the space bar for optimum performance. Rounding out the specs is a full-size backlit keyboard, plus Wi-Fi and Bluetooth.

The Aspire R7 will go on sale through Best Buy on May 17, and has been priced at $1000. Acer has noted there will be additional Aspire R7 models announced in the coming weeks, so if the spec of this one doesn’t quite meet with expectations, one that does may not be far away.