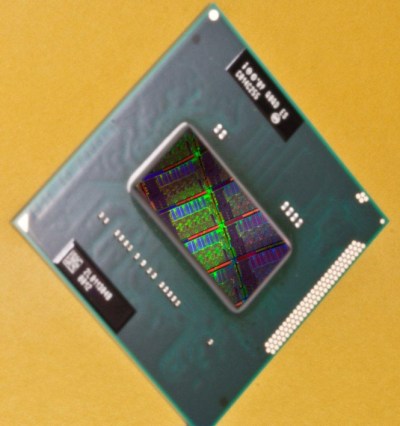 Chipmaker Intel has revealed that its latest and greatest Sandy Bridge CPUs—the latest in its Intel Core line that it promoted triumphantly at CES—contain a design flaw. Intel has halted production of Sandy Bridge chips to implement a fix—all told, the solution will cost about $700 million, and Intel is scaling back its revenue forecast for the first quarter of $300 million due to reduced sales volume.

The design issue impacts Serial ATA (SATA) ports that the chipsets use to communicate with hard disk drives and other devices like DVD and Blu-ray drives; over time, the ports within the chipsets may degrade, impacting the performance of connected storage devices or preventing the chips from being able to connect to the devices at all. Intel says it has corrected the design issue and has already begun manufacturing a corrected version of the chipset; however, the company is quick to point out that the Sandy Bridge CPUs themselves—the heart of the system—are not impacted.

The faulty systems have been shipping to computer makers and other OEMs since January 9. Although relatively few consumers will be impacted by the issue, anyone who has purchased systems with Intel’s second-generation Core i5 and Core i7 quad-core systems should consider contacting the manufacturer or the system to see about repair or replacement. Intel doesn’t believe those systems are in any danger of immediate failure, but customers should work with the manufactures of their products to get a permanent solution.

The announcement of the chip flaw—and the interruption in Sandy Bridge manufacturing—has has a significant impact on Intel’s financials: trading in the company’s stock was temporarily halted on the New York Stock Exchange prior to the announcement, and the investment community is less-than-pleased with a $700 million cost to implement the repair and replace effected systems already on the market, plus $300 million more in lost sales. From an investor’s point of view, that’s a billion dollars Intel had last week that’s gone today.

Apple’s mini-LED external display may be delayed until early 2023
You can grab a great student laptop for only $379 with this Dell deal
This is your chance to save over $500 on a powerful Lenovo gaming PC
This Lenovo ThinkPad laptop is $1,700 off — we’re not kidding
Norton Antivirus Free Trial: Get a week of protection
ABCMouse Free Trial: Get your first month free
Intel Arc A770 16GB vs. A770 8GB vs. Nvidia RTX 3060
Intel Arc A750 vs. Nvidia RTX 3060
Can I use an Intel Arc GPU with AMD Ryzen?
Intel Arc Alchemist: specs, pricing, release date, performance
Microsoft Word Free Trial: Get a month of service for free
NordVPN Free Trial: Try the service for free for a month
CyberGhost Free Trial: Protect your browsing for free