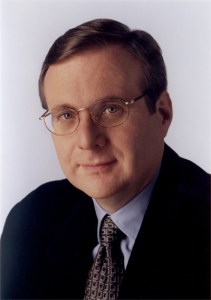 With the barrage of lawsuits flying between tech giants these days, it’s great to see someone grab a big pen, run out, and Rambo his way through the madness. Paul Allen, a co-founder of Microsoft, has revised and refiled his epic patent suit against almost every Internet giant around. Apple, Google, YouTube, Facebook, Yahoo, AOL, eBay, Netflix, OfficeMax, and Staples have been sued for infringing on patents won by Interval Research Corp., a tech company Allen owned and shut down about a decade ago.

A couple weeks ago, a judge in western Washington dismissed the lawsuit as too vague. Undeterred, Allen said he would revise the suit. Yesterday, he refiled it with newer, more specific language, reports the WSJ. The revised complaint lists specific products and services that infringe against Interval Research patents, mostly having to do with product and page recommendations.

Where it relates to Google, the suit alleges that Google Search, Gmail, Google Finance, Google Videos, YouTube, Google Maps, Orkut, and Adsense’s ad-payment system all infringe on patents that help determine how content items are related.

The timing and expansiveness of the suit have called Allen’s motives into question. Is the co-founder of Microsoft (one of the only companies not listed in the suit) in need of money or is he trying to make a point about how frivolous tech suits have become? Maybe he thinks the patent system as a whole is broken, or perhaps he just woke up one day feeling robbed.

Paul Allen was treated for lymphoma in late 2009 and underwent chemotherapy. He was declared free of cancer in Oct. 2010. He is one of the top 50 richest men in the world with a personal wealth of $12.7 billion and has committed to giving away half of it to charity.

[Updated:  Thanks to our reader Andrew for pointing out a typo.  Article has been corrected and updated]

How to block third-party trackers in your browser

Hackers can now take over your computer through Microsoft Word