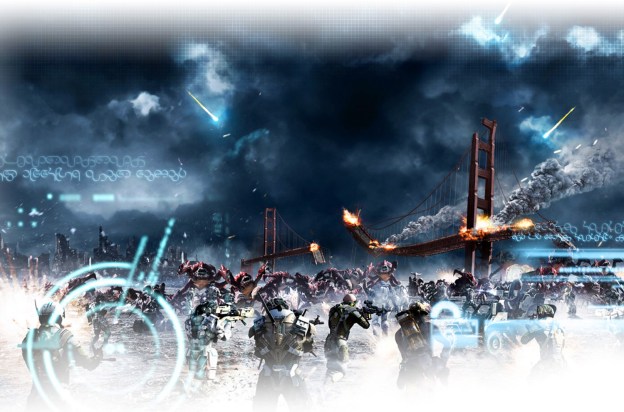 Defiance Executive Producer Nathan Richardsson revealed new details about Trion Worlds’ DLC strategy today, in an announcement on the Defiance community site. Each of the five upcoming DLC updates for Defiance will include three types of content: free, paid, and in-store. The free content will be available to everyone as soon as the DLC launches, while the paid content will require an extra purchase, and the store content will be added to the in-game store for anyone to buy.

The first DLC pack, expected later this month, Richardsson joking called “Enter the Castithan.” As the name suggests, it will introduce the Castithan race as a playable character, as well as offering a ton of other content as well.

Richardsson also refered to the first such expansion as a “TV Tie-in,” or Patch 1.020 This expansion brings with it content of each type. All players will receive free access to new weapons and game modes and a new map, plus bug fixes and UI improvements. But for $10 players will also get a new character type, story mission, vehicle, and outfit, plus new weapons and achievements/trophies. On top of that, more items, including new vehicle and weapon skins, will be added to the in-game store. Richardsson says this DLC will tie in to the Defiance TV show (which, incidentally, SyFy just confirmed has been renewed for its second season), and that future expansions, including the four more Trion DLCs planned for this year, will adhere to a similar format.

The full list of what is coming and under what category it falls can be found below:

You can buy these individually from the store:
– New Mods that tint the color of your Castithan Blade
– Lockboxes have a chance to get Charge Weapons
– More versions of the Raptor, the new 4 player truck of doomed compensation
– Character Customization changes: Appearance change, name change, or everything change

“It’s good to see that we have made great progress since launch and we have teams continuing to make improvements and fix bugs. At the very least, the feedback and numbers indicate that you are happier,” Richardsson writes. “But what’s stated by players and critics alike, whether they love or hate us, is that we’re taking known concepts and doing something new, we’re fun, and we have potential. That’s not an excuse for not being perfect, but I’m certainly not going to complain about trying something new, fun and having potential.”