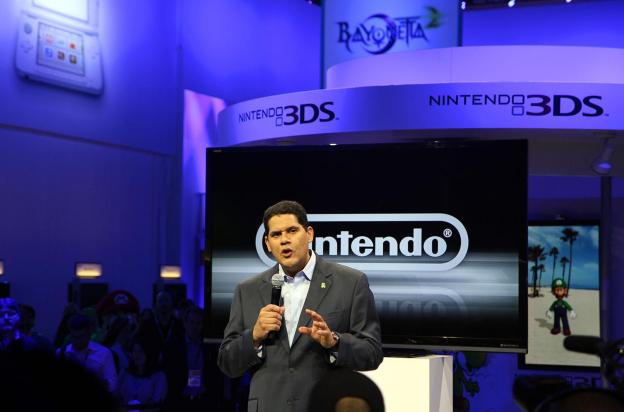 There was a brief moment of hope for Nintendo during the company’s not-press conference press conference on Tuesday. As the extended string of awkward reveals and info dumps wound down toward the play portion of the morning, an announcement boomed across the packed Nintendo booth: stay tuned for a special announcement at 11:40am, 20 minutes before the close of the first-of-its-kind (and hopefully last) Nintendo Showcase and the start of E3 festivities.

Trotting out old favorites and rehashing beloved classics only gets you so far.

Ears perked all over. Special announcement? What could it be? A peek at the in-development Zelda game for Wii U? A new Metroid? Perhaps even something completely new, a fresh franchise filled with a memorable cast of insta-classic characters? We dared to get our hopes up. As poorly executed as the morning showcase was, it was at least something new. Different. Nintendo getting its groove back? Maybe. Hope springs eternal, at any rate.

Then came the reveal: the female Wii Fit Trainer character will join the fighters’ roster in 2014’s Super Smash Bros. for Wii U and 3DS.

Let’s back up for a moment: Nintendo chose to forego the usual press conference this year and instead invite media into its show floor booth for a couple of hours before the start of E3. The idea being: screw the stage show, just come on in and play our games. A great idea in theory, right?
Unfortunately, the reality didn’t live up to that ideal. Members of the press gathered early and were ushered into a holding area on the outskirts of the show floor at around 9:30am. We were then filed into the actual booth area at roughly 10am and spent the next 20 minutes standing in front of a stage, surrounded by non-functional demo stations while an animated, talking Mario played hypeman on a screen. Really, it was just irritating and, after the first few minutes, headache-inducing.

The stage portion of the showcase finally started a little after 10am, with Nintendo of America boss Reggie Fils-Aime stepping out to say hello and tell us about the play portion of the showcase … which would happen after a few brief words from the developers. Thus began the not-press conference. The chattering, standing room-only stage show finally stopped at around 11am, at which point the 200 or so attending press had to line up and vie for time at the demo stations. It would have been a full hour of play time, had we not all been shooed off of our demos at 11:40am for the aforementioned Wii Fit Trainer announcement.

So much wasted time. So much for all of that promised hands-on time.

Something is gravely wrong at Nintendo. The house that Mario and Link and Samus and Pikachu and any number of others built is crumbling, and no amount of remakes, reboots, or re-tools is going to change that. This is a company that lives and dies by its first-party catalog. It’s a fact that becomes increasingly clear as publishers inch further and further away from committing to Wii U development. Mario is getting old though, and so are his friends.

It’s not that there’s anything wrong with the upcoming lineup. An HD remake of The Legend of Zelda: Wind Waker won’t make anyone cry. New Pokemon and more 3D, HD Mario, these are things that fans like as well. Donkey Country: Tropical Freeze has a ridiculous name, sure, but it’s also more DKC with new music from David Wise! The Link to the Past sequel is certainly welcome too, as is any game that injects more Link into the 3DS catalog. And, hey, more Mario Kart is kinda cool … right?

Here’s the thing though: a lot of this stuff isn’t due out until 2014. That’s a big problem. Nintendo needs to move more Wii U’s into gamer living rooms, pronto. There’s already a groundswell of ambivalence directed at the new hardware, and the coming of significantly more powerful next-gen consoles in a matter of months will only create additional distractions. Third-party publishing partners just aren’t going to bring the necessary juice to galvanize an audience, especially with heavies like Electronic Arts backing away slowly, as if from the scene of a bad traffic accident.

The answer, of course, lies in appealing to the faithful diehards. The Nintendo fanfolk that line up and exult in Sunday launches. A solid games lineup doesn’t solve for, “Why?” It feels like the magic is gone. Nintendo has always been the Disney of video games with its stable of family-friendly first-party favorites, but so much of it feels generic now. Paint-by-numbers. The sense of wonder that carried across all of the company’s games for so long? It’s gone.

This isn’t a hopeless situation. The Wii U feels like it’s on the verge of a Dreamcast-level failure right now, but at least there’s a solid foundation to work with. A price cut on the hardware is absolutely necessary; $350 is far too much to ask for a piece of hardware that is immediately eclipsed by all of the new tech at this year’s E3.

Then there’s the issue of creative stagnation. The Wii U can’t compete on a technical level with the PlayStation 4 and Xbox One, but it possesses a very specific set of strengths that could be better leveraged into memorable experiences. Ubisoft Montpelier proved that with ZombiU. Nintendo is a company that used to take chances and drop jaws on a regular basis. That just doesn’t happen anymore. Trotting out old favorites and rehashing beloved classics only gets you so far. The Wii U – and the Nintendo brand as a whole, really – needs something new.  Several somethings.

This is an E3 of great change, and it’s all passing Nintendo by. Fall 2013 is going to be a rough one for the Wii U, no question. Will the company finally learn from its mistakes after the failure of this year’s non-press conference press conference? It isn’t about how you stage your circus, or how quickly you put a controller into the media’s hands. What does it matter when the game being played is merely … fine? That’s the big lesson here. The best we can do now is hope that this monolithic old guard of gaming figures out a way to survive.

This Nintendo Switch bundle deal is selling fast – get it while you can
Mario Kart 8 Deluxe’s next DLC drop adds some of the series’ best courses
The best Nintendo Switch shooter games
The best free Nintendo Switch games
The best Call of Duty: Warzone 2.0 weapons for Season 1
How to get all starters in Pokémon Scarlet and Violet
Black Friday: This MSI gaming laptop just dropped under $500
Evil West perks guide: best perks to buy first
How to evolve Pawmo into Pawmot in Pokémon Scarlet and Violet
Live now: Save $50 on the Microsoft Xbox Series S Digital Edition deal
‘Wordle’ today, November 24: Answer, hints, and help for word of the day (#523)
7 video game characters who deserve a Macy’s Thanksgiving Day Parade balloon
The best multiplayer games on Nintendo Switch