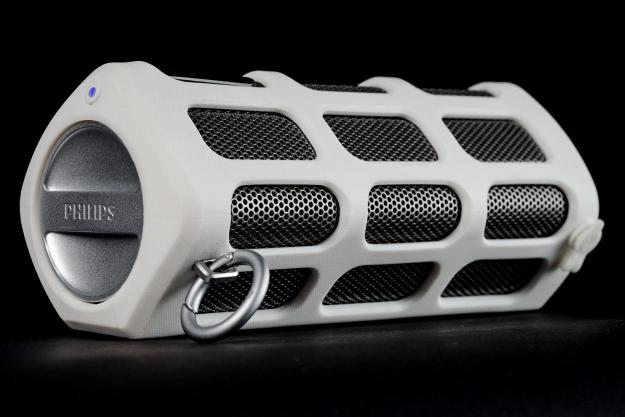 “…the fun was cut short for us by mediocre audio, a dodgy Bluetooth connection, and a gesture control interface that seemed to play by its own rules.”

Philips Electronics has struck a new blow in the quest for portable Bluetooth speaker world domination. Its weapon of choice? Gesture control. Philips’ latest wireless companion, the $108 Shoqbox SB7200, incorporates a small motion sensor atop its honeycomb frame, allowing the user to navigate songs, answer phone calls, and stop and start music playback, all with the wave of a hand. Adding other conveniences like a water-resistant exterior and vertical or horizontal orientation, the Shoqbox makes a hard pitch for coolest entry-level portable on the block.

Of course, we’ve likely all had our fair share of gesture control backfires, waving our hands incessantly as the targeted device stares back in silent condescension. We wondered whether Phillips’ new toy could keep all of its promises and still deliver some decent audio. To find out if the Shoqbox fires on all cylinders, we took the speaker along for a few real-world adventures. Here’s how she fared.

The Shoqbox is a stout little unit. Removing it from its package revealed a thick netting of rubberized armor in bright white, layered over a frame of metal meshwork. Like most Bluetooth speakers we test, there’s a futuristic theme to the Shoqbox’s aesthetic, vaguely reminiscent of a column or skyscraper from Star Wars. The speaker ships with a small mini-USB to USB cable with a DC adapter and an instruction packet in multiple languages.

The Shoqbox’s unique feature set and design set it apart from most of the rectangular clones we’ve seen in the segment. And when you’re in a market that’s more saturated than a George Foreman Grill’s grease trap, different is good…in any sense.

…when you’re in a market that’s more saturated than a George Foreman Grill’s grease trap, different is good…in any sense.

The white shield (it’s also available in black) that covers the exterior of the speaker is heavy, yet soft to the touch, providing a nice grip for transport. Though the speaker appears rectangular, it’s actually a pentagon, with a fifth side to its design that serves as a stand, allowing you to aim sound up at a 45-degree angle. If you’re level with the speaker, you can also set it flat on its front side or stand it up vertically. There’s also a small ring attached to its top to hang it up.

Just below the surface of the front panel sit the Shoqbox’s not-so-shocking 1-inch drivers. The speaker uses a form of bass reflex built into the frame to help boost the bass, but the drivers are on the small end of the spectrum, even for an entry level portable.

The speaker is capped on one end by a water resistant flap, which protects the mini-USB power input. Another small protective flap on the speaker’s back face protects its 3.5mm Aux input. At the right end, or top, is a silver dial with a Philips logo etched into the side which acts as a digital volume dial. Next to the dial is the only other onboard control piece on the unit, in the form of a an LED-equipped multi-button, which glows blue upon startup. Other features include a lithium ion battery that lasts approximately 8 hours per charge, and a built-in mic for fielding phone calls.

The final piece of the puzzle is a black sensor just below the power button, which is used not only for gesture control but also to pair a companion Shoqbox to the speaker for true stereo separation.

The Shoqbox arrived at our offices fully charged. After following the voice prompt to select English upon startup, we navigated to our phone’s Bluetooth settings and the speaker immediately paired to our iPhone 5. Two more presses of the power button engaged the gesture command feature, and we were off, starting and stopping music playback with a downward gesture, and swiping our hand left or right to search songs backward and forward respectively. It was pretty fun to play with, especially in the novelty stage, and we were immediately impressed.

The Shoqbox’s mini drivers did a good job with the midrange. Shuffling through tracks from our rock and acoustic genres, there was a bright presence to the mid response, ushering clean snare and hi hats, lyrical guitar, and clear vocals. The speaker had a particularly good command of lighter acoustic instruments, lending a brassy touch to acoustic guitar and articulate string attacks on instruments like banjo and mandolin.

However, as we listened further we began to notice a lack of effort at the peripheries of the frequency spectrum, especially in the bass section. Ironically, it wasn’t TuPac, or Chamillionaire that first brought the issue to our attention, but Cat Stevens (we refuse to call him Yusuf.) As the stand-up bass entered on “Wild World” we were really put-off by the sound, which came through less like a fluid stringed instrument, and more like the gravely throat of a veteran smoker humming along.

…the speaker allowed for very little definition or clarity in higher instrumentation.

Since the Shoqbox is pretty quiet even at full volume, we had our iPhone cranked to get a proper critique of our older recordings, which can cause signal distortion. Lowering the volume to the recommended 75% level helped relieve a lot of the bass distortion. Still, we couldn’t totally eliminate the issue, occasionally uncovering a flat, bottomed-out sound from kick drums and bass lines, present on tracks from artists as varied as Dave Matthews to Peter Tosh.

Though it was less of a concern, the treble was lackluster as well, especially in the “sparkle” range above the 7-8K frequencies. Crash and ride cymbals were never harsh, but sustain seemed to dissolve quickly upstairs, and in general, the speaker allowed for very little definition or clarity in higher instrumentation.

Bringing the Shoqbox to a weekend bbq, we resolved to forget about its sonic shortcomings. After all, we shouldn’t expect much from the bass in a speaker this size, and what’s a bit of distortion from a speaker in the background of a horseshoe pit anyway, right?

But the speaker pulled a fast one on us as soon as we attempted to show off its coolest feature. We set it down on a picnic table and called attention to our demonstration, before attempting to fire up the music using the George Bluth Sr. method: “No Touching!” We moved our hand downward. Nothing. We moved it slowly downward. Nothing. Smoothly, artistically, and conductor-esque, we tried again, to no avail. We then pressed play on the iPhone, and attempted to advance tracks via gesture, which had never failed at home. Nothing. Our best guess is that the sensor was blinded by sunlight, which affected its sensitivity. But if that’s true, it cuts a lot of outdoor fun out of the equation.

So, motion sensor and floppy bass aside, we set the speaker on a bench to rock out as we continued to enjoy the day, attempting to ignore it. Unfortunately, Shoqbox didn’t want to be ignored. Its weak connection to our iPhone created constant interruptions, even though we were well within the 10 meter boundary. To be fair, the Philips website says the speaker requires line of sight to work correctly. But we expect to be able to put our phone in our pocket while standing 8 feet away from a portable speaker without incident – otherwise, what’s the point of a wireless connection to begin with?

With a sleek design, rough and tumble armor, and a futuristic feature set, Phillips’ Shoqbox SB 7200 seems like the perfect new toy for your summer escapades. But the fun was cut short for us by mediocre audio, poor Bluetooth signal, and a gesture control interface that seemed to play by its own rules. At a reduced price of $108 on Amazon, the Shoqbox isn’t the worst choice you could make for a Bluetooth speaker, and if motion control and water resistance is a big seller for you, it’s definitely an option. However, if you want solid performance on all facets, we recommend looking elsewhere.