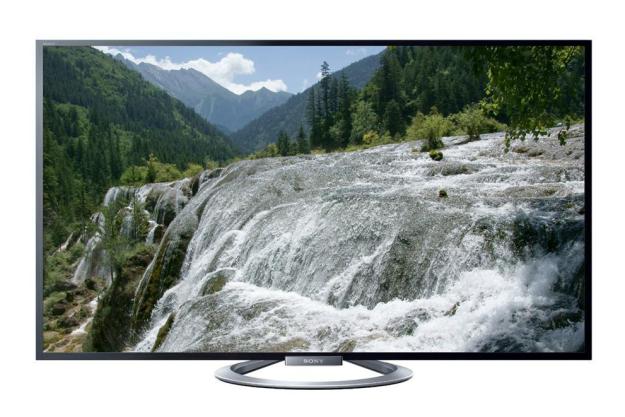 “With a bright, brilliant picture, Sony’s W802 is a solid choice for everyday viewing, but its troubles with judder keep us from getting too excited.”

Sony W802A Series information: This review is based on our hands-on experience with the 55-inch KDL-W802A  TV. However, our observations also apply to the 47-inch KDL-47W802A. According to Sony, the two sets differ only in dimension and weight and offer identical features and performance.

In Sony’s TV’s royal guild, the 55-inch W802A might not be the king, but it’s certainly a blueblood. Sitting atop Sony’s second tier, the W802A is a sleek, slim display, oozing with digital features, offering all of the spoils you’d expect from a 3D Smart TV. Once listed at a whopping price of almost $2400, the W802A can now be had for a fraction of that, floating right around the $1600 mark. We recently spent some time running the big boy through its paces to see what kind of value Sony now offers from its second class. Here’s what we discovered.

The W802A doesn’t have the glass-covered, dissolved bezel we’ve seen from the industry’s top offerings, but it’s still a beautiful TV. The slim bezel around the screen is composed of chic cuts of brushed metal, outlined by a laser-fine line of aqua along the outer edge. A mirrored front plate displaying the Sony logo underlined with a multi-colored array of LEDs is the only disturbance on the otherwise succinct front panel. The TV is very light for its large screen size, weighing a mere 46 lbs., even while mounted on its rotating, half-moon stand. While it’s arguable that such a large screen is always a bit of an eyesore in the average living room, the W802A’s smart aesthetic and slim depth make it an attractive addition.

Those with a growing collection of components and gaming consoles will appreciate the W802A’s deep bench of inputs. Recessed into the back panel are 3 HDMI inputs, separate composite and component inputs, a coaxial cable input and an Ethernet port. Dual side-bays harbor another HDMI input with MHL capability as well as 3 USB media ports. Audio outputs for the TV include a digital optical output, and a 3.5mm analog output.

The W802A’s interface is easy enough to use once you get the hang of it. Pressing the Home button on the remote spreads out a bank of options horizontally like a deck of cards, making navigation through the list of applications, connected components, and settings intuitive. The menu provides basic explanations of each of the vast array of settings, and there are some cool aesthetic touches like a pulsating highlight bar that alternates colors. The options menu offers a secondary path to the picture and sound settings and also hosts a few features of its own. One annoyance is the loud beeping associated with each selection made, which we couldn’t seem to silence without muting the TV.

The remote control is simple, with a small selection of keys atop a dimpled, faux-carbon plastic casing. Notable quick keys include the obligatory Netflix shortcut button, a 3D button, and the SEN (Sony Entertainment Network) button which calls up the TV’s full list of applications. Onboard control for the TV is done the old fashioned way: via a rudimentary set of keys located at the lower left edge of the panel.

The W802A boasts specs similar to many TVs in its class, with 1080p resolution and a 120Hz native refresh rate. But the real story unfolds in the digital realm. Looking under the covers reveals a thick helping of Sony’s digital enhancement options, powered by the “X-Reality Pro” engine. The wide swath of features includes multi-tier adjustments for everything from smooth gradation (for lower bit-rate content) and frame interpolation, to black level and contrast enhancers, along with a host of others.

The panel is illuminated by Sony’s “Dynamic Edge” LED backlighting. The process trades the local dimming we see on some upper-tier edge-lit LCDs for “frame dimming” (confused yet?). For the uninitiated, local dimming can selectively reduce lighting to allow for better black levels. Sony’s website is a bit murky on the subject, but from what we can surmise, “frame dimming” dims the entire panel instead. We’ll get into that more in the performance section.

The W802A’s 3D processor forgoes the active shutter 3D we’ve seen on past models for passive 3D, similar to what you see when you throw down that extra five bucks for 3D at the theater. Included in the box are four pairs of flimsy-looking 3D glasses. While it seems like breaking a pair or two of the specs might be inevitable, they’re easy to wear, and we appreciated the featherweight design during some of our longer 3D viewing sessions.

Sony’s smart interface is packed with all of the apps you’d expect with a few curve balls thrown in for good measure. Choosing “Applications” from the Home screen raises a list of common names like Netflix, Hulu Plus, Amazon Prime, YouTube, etc. But pressing the SEN button pulls up a massive block of options, with welcome additions like NPR, Pandora, and tons of other stuff you’ve likely never heard of. One of this TV’s cooler features is its “Related Search” operation, which is designed to analyze music and video content currently playing on the TV, determine what it is, then display any available content relating to it online. We tried the feature out on a few tunes, and it had an impressive success rate.

At first glance, the W802A’s picture looked solid out of the box. However, like many mid-to-upper level LCD displays, it benefits from adjustment, and there’s much more to the TV’s picture settings than meets the eye. Aside from surfing through and disabling a large portion of the aforementioned digital enhancements, dialing in an optimal picture requires paying attention to some of the TV’s deeper layers.

Sony’s smart interface is packed with all of the apps you’d expect with a few curve balls thrown in for good measure.

The picture mode includes only three basic settings: Standard, Vivid, and Custom. However, a much larger selection can be found in the “Scene Select” section. Not only is the organization a bit confusing, but if you don’t seek the section out, you may notice the TV is mysteriously adjusting the picture on its own. For connected components like Blu-Ray players and gaming consoles, the “Scene” defaults to Auto mode, which automatically adjusts picture based on content. To disable the feature, you must choose a specific scene, or set it to General.

We also had to dig around a bit to find the Ambient Light Sensor (it’s in the Eco section). The sensor auto-adjusts brightness according to the light in the room, which holds you hostage to the TV’s interpretation of the environment. We disabled the setting, though we must note that Sony’s version was one of the least buggy auto-dimmers we’ve come across.

After shutting down most of the W802A’s HAL-style features, we were able to get the picture dialed in pretty well with basic adjustments to the Standard preset along with a few other tweaks. Sony’s common input option saves a lot of time for those with multiple components, but be warned: if you don’t select it before you adjust your settings, you’ll have to start all over again. A list of all of our preferred settings can be found at the bottom of this review.

Subjectively, the W802A’s picture quality was impressive, easily blowing budget competitors like the Hisense T710DW out of the water. Though we’ve seen better overall color, the TV produced a crystal clear image with excellent consistency across all of our connected components. Almost any 1080p TV can do a decent job rendering Blu-Ray content, but the W802A was equally adept at displaying impressive images from broadcast television. From HD sports to cooking shows to old standard-def reruns, we were treated to a clean picture with excellent detail.

Another high point was the W802A’s excellent off-axis viewing, which is often a nagging issue with LCD displays. Even when we viewed the screen from the other room, the milky color and contrast issues that we’ve endured with so many of the TVs we’ve recently tested were absent.

The TV’s short lag time and dual screen feature also make it a lot of fun for gaming, so we spent some long hours perfecting our skills on NBA 2k13, and Call of Duty — you know, for research.

However, when we turned our critical eye to film content, we discovered a few troubling issues.

The first thing we noticed was significant judder – a good deal more than we expected from an upper-tier TV. In the entry scene of The Hobbit: An Unexpected Journey, swooping camera pans across the emerald turrets of the dwarves’ magnificent cave palace were displayed with notable stuttering. The issue grew less apparent as the movie progressed, but it came back in full force while viewing our Planet Earth collection. The telltale scene of a fly-by over a glacial valley created measurable jerks across the image – so much so that we almost had to turn away. We were able to solve the issue by activating Sony’s Motionflow tech on its rather tame Standard setting, but then fast-moving animal scenes seemed artificial – robbing leopards to pay glaciers, so to speak.

Our other main concern with the W802A was its performance in the dark. Without digital assistance, the panel’s edge-lights create a noticeable glow, displaying flares at the corners that invade the image. We were able to temper these issues by activating the TV’s “Advanced Contrast Enhancer,” which created much deeper blacks while allowing for good shadow detail. However, as expected, we never totally eliminated the excess glow. Raising the contrast enhancement setting above low created some strange results on brighter images, especially on faces. For giggles, we set the feature to High while viewing an episode of 30 Rock and were rewarded with a ghoulish smearing of the actors’ faces, making them look zombie-esque.

Watching our go-to 3D disc, Prometheus, we enjoyed the W802A’s passive 3D about as much as we usually do. That is to say, it was handled well and created some nice depth, but even without active shutter, it still made our eyes tired. There were a few notable “wow” moments, though, such as the fluttering sparks of the alien hologram after it races through the cave, or the tattered debris that rained down from the aerial explosion at the film’s climax.

The W802A’s onboard speakers offered some decent low-end power considering the panel’s thin dimensions, but the midrange and treble were bland, lacking the tactile clarity that we keep hoping to hear. With that said, any time a flat screen’s sound isn’t horrendous, it’s a plus. Those looking for audio splendor should always plan to invest in at least a sound bar, or, better yet, a home theater setup.

Sony’s W802A proved to be a formidable TV for everyday use – particularly for viewing in daylight – providing a sharp image, a feature packed smart interface, and that telltale Sony appeal, all wrapped in a handsome frame. We enjoyed the TV for sports, gaming, and most other content. However, its difficulty with 24fps film content and the issues we experienced with its “frame dimming” feature make it feel a bit unfinished, lacking the luxury experience we expect from Sony’s second in command. For those reasons, we can’t wholeheartedly recommend it, especially for those who have spending room above the $1600 line. That said, the TV does provide a quality picture across an expansive screen, and its price won’t drain your child’s college fund. Depending on how you watch, you may want to keep Sony’s W802A in mind.