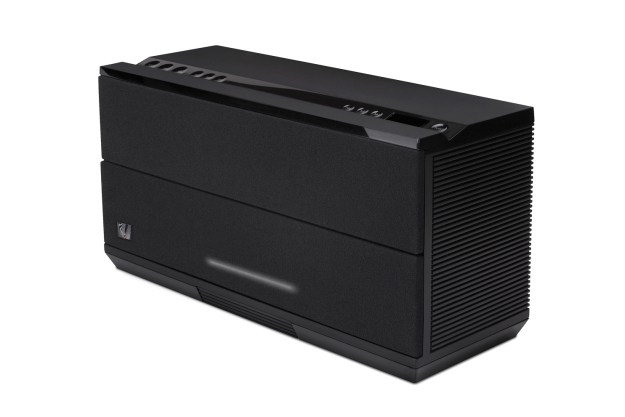 Earlier this year at CES, we sat down with Soundfreaq co-founder, Matt Paprocki, to talk about the revamp of the company’s flagship Bluetooth speaker, the Sound Platform. The Sound Platform 2 (slated for release later this month at $150) is slimmer, cheaper, and loaded with cool new features like “device agnostic” charging and the ability to wirelessly connect a pair of the speakers together for true stereo separation.

While we weren’t able to perform a detailed sonic evaluation of the Sound Platform 2 amid the din of 150,000 convention visitors, we did walk away fairly impressed with the overall design of the new version, and with some respect for Soundfreaq’s intention to provide a quality audio experience that’s also extremely convenient and affordable.

Still, though the Sound Platform 2 has some interesting tricks up its sleeve, it also happens to reside in one of the most saturated audio markets in existence right now. Could the performance of Soundfreaq’s new speaker help it rise to the top of the deep Bluetooth abyss? We sat down with a pair of them to find out.

If Bluetooth speakers have a mantra, it’s simplicity. The packaging of the Sound Platform 2 fits that bill perfectly. Opening the box we found the rectangular unit wrapped in foam and suspended between two pieces of brown packing material. A quick start guide, a power cable, and an FM antenna were the only additions to the succinct package.

Like many of the Bluetooth devices we see these days, the Sound Platform 2 is a fairly indistinct rectangular box. Its all-black exterior has few discerning features, save a horizontally divided speaker screen at the front, and a bar at the base of the unit which illuminates when powered on.

A row of glossed touch-capacitive keys runs along a thin strip on the top of the unit, along with a small digital screen which guides you through the Sound Platform 2’s various options. The buttons control the usual commands like power, Bluetooth pairing, play/pause, and song selection. In place of its predecessor’s EQ dials, this rebooted version has a tone button to scroll between 3 different presets including flat, warm, and bright. Soundfreaq says the new system was developed to simplify sound control for the average consumer, but, as sound junkies, we can’t help but lament the more comprehensive control of individual dials.

The button most users won’t find familiar is the UQ3/DSS mode control. UQ3 is Soundfreaq’s proprietary flavor of DSP, designed to create better stereo separation between the Sound Platform 2’s pair of 3-inch drivers. Stereo separation is a big focus for Soundfreaq, and the company is hoping it will be for the average consumer as well. The new DSS mode allows the dock to pair with a partner Sound Platform 2, splitting them into distinct left and right channels. To help facilitate this novel push towards real stereo monitoring, the Sound Platform 2’s official release will involve two of the speakers bundled for sale through Target at a reduced price of $250. A $50 battery with a run time of about 5-7 hours will also be offered as an accessory, making the dock fully portable, reportedly with no sound degradation or volume loss.

In place of a 30-pin iOS connector, this “device agnostic” dock employs a slightly awkward tray which ejects from the front to hold your device. Opening the tray reveals a chamber through which you can run USB cables to the dock’s two charging ports at the back, or a 3.5mm cable to connect your device to the aux input. While we appreciate the communal spirit of device equality, the new tray feature is a bit sloppy. We ended up just placing our iPhone on top of the speaker when we wanted to charge or play through the aux input.

In place of a remote control, Soundfreaq offers an app for your Apple or Android device. With the app installed, you can control almost everything from the palm of your hand, including volume, source, song selection, and even station selection for Sound Platform 2’s built-in FM radio — though the process to get from “station to station” seems to take nearly as long as the Bowie song of the same name.

(Note: there is no way to use FM radio in DSS mode.)

We appreciate the app, but it has some holes: There is no way to change the tone selection, which can be important as you shuffle through music genres. Also, when you have two docks connected, though they are slaved, you can only change volume remotely on one of them. The easy solution is to set a good max volume on one dock manually (which the other will mirror) and then control the overall volume from your source device. While we found this lapse to be a bit annoying, the good news is it’s an app, which means there’s always room to fix these issues through updates.

We put the Sound Platform 2 through a vigorous round of testing, using multiple songs from our catalog with a single unit, later connecting a second via DSS mode. Though we ran into some issues here and there, we found the speaker exhibits an impressive range of clarity and expression for such a small package.

Cycling between the Sound Platform 2’s tonal presets creates a bit of a pick-your-poison scenario. With small, 3-inch drivers, there are obvious physical limitations at play. Though we usually appreciate a darker tone, we found the “warm” selection significantly limits treble presence, clouding the sound. And though the “bright” and “flat” presets added some unwanted sibilance, we actually spent most of our listening on the “bright” preset for its crystalline treble, and impressively accurate detail.

The Sound Platform 2 absolutely gleams when it gets ahold of stringed instruments, especially on fully acoustic tracks. We put on some of our favorite acoustic albums and found the unit rose to the task with an impressive array of tone quality, expressive timbre, and immaculate delicacy. Our favorite moments came with violin, where the unit blossomed in the high register, gliding through the melodies with ease. Breathy vocals and rich guitar tones came through with incisive clarity, bringing the music to life in dramatic fashion for a speaker available at entry-level pricing.

We were slightly less impressed with the speaker’s ability to handle more complex rock tunes, and, of course, hip hop. The lack of a dedicated subwoofer limits the speaker’s ability to lend a punch to the lower midrange on big-sounding tunes. Things got a bit overwhelming for the Sound Platform 2 when we tried to crank songs like Pearl Jam’s “World Wide Suicide.” While the drivers never grossly distorted, they sounded as if they were right on the verge of doing so. And, at times, there was a tendency for the upper register to get a bit tinny. To be fair, the Sound Platform 2 did an amicable job on hip-hop tracks for a small dock, but those looking for serious low end power will find the device ill-equipped for the challenge.

With that said, when we placed the speaker near a boundary such as a corner or long wall, it produced a lot more bass than we’d originally expected. And we really don’t remember when we’ve heard a more accurate dock when it comes to the upper register. It seems that Soundfreaq has squeezed just about every ounce of tone possible out of the little unit.

While there are some issues with remote control of the DSS mode, it took one album to make us believers: Radiohead’s OK Computer. We dialed up the classic on our iPhone, and sat back, awash in the glimmering echoes of true stereo separation, and a blazingly clear center image. We listened to the entire album completely through – twice – and though there were some instances where we noted excessive sibilance or longed for a subwoofer, we spent the lion’s share of our listening time content.

Thom Yorke’s voice was revealed with stellar accuracy, and we could pretty much make out all the words – which might actually be a first. Besides that, we marveled at the fluttering wall of sound before us, erected by the action duo of speaker docks. With their powers combined, true stereo lives again in the realm of Bluetooth.

It’s easy to scoff at the idea of buying two iPod docks to get stereo separation – why not just buy a pair of powered speakers? But a duo of Soundfreaq Sound Platform 2’s offers a unique combination of performance, flexibility, affordability and potential portability not often seen in the crowded Bluetooth speaker market. Even as a stand-alone unit, the Sound Platform 2 has a lot to offer. If you’ve been looking for the right Bluetooth speaker but haven’t found it yet, keep your eyes out for the Sound Platform 2 over the coming weeks – it might be just what you’ve been looking for.