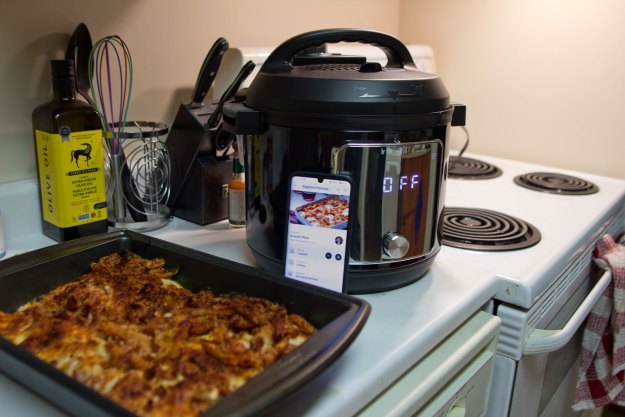 “Discovering new recipes and beaming their instructions to the Instant Pot directly from your phone is a fun gimmick, but not one without its trade-offs.”

For all of its multitude of functions — making yogurt, sous vide, canning — Instant Pot has had a hard time getting connected to phones. Despite having mounted some impressive summits of popularity, how could Instant Pot really hit that giant swathe of folks that want Wi-Fi in every single thing in their home? A recall in 2015 of the original Instant Pot Smart put a damper on an appliance that we otherwise loved. Luckily the phone-friendly feature is back, and we’re taking a deep dive to see what else is new.

First things first, you need to create an Instant Pot account just to pair the appliance to your mobile device. I initially wanted to make my account through my PC so I could get Chrome to generate a robust password, but that process wasn’t carrying over well to the mobile app. Ultimately I ended up making another account from the mobile app with a weaker password, which is less than ideal. Some sort of Facebook connection would make account creation a lot more painless. The pairing process was par for the course for most smart home devices: Connect over Bluetooth, share your Wi-Fi password, then off it goes to connect. Also common for smart home devices is the requirement for a 2.4 GHz Wi-Fi network.

Once fully plugged in, you can engage the Instant Pot to (deep breath) pressure cook, slow cook, cook rice, steam, sauté, make yogurt, warm meals, can preserves, sous vide, and NutriBoost, which mimics the effects of boiling without actually burning off all those nutrients.

The biggest selling point of the new Instant Pot Pro Plus is its smartphone connectivity. Through it, you’re able to peruse a sprawling database of recipes, check on the status of your cooking, and remotely control the process.

The recipes really dominate the conversation when it comes to the app. The main convenience comes from wirelessly beaming the cooking settings from your phone to the Instant Pot and start cooking right away. Discovering recipes was a breeze. You can filter for vegetarian or vegan diets, which time of day you’re eating, difficulty, and prep times. Searching for vegetarian dinners produced only 40-odd results out of an original 1,500, many of which were some permutation of tofu, quinoa, butternut squash, or lentils. It was clear that I wouldn’t have a lot of mileage in the long haul.

I settled on an eggplant parmesan namely because my partner can handle the vegetarian diet if there’s enough cheese involved. A shopping list feature lets you export the ingredients to whatever app you normally use for that kind of thing. I would have been equally happy to check them off within the Instant Pot app itself. The recipe was pulled from the web and had each step properly broken down, alongside shortcuts to start the Instant Pot and set timers. A system tray notification persists while the app is running so you can keep tabs on cooking progress at a glance.

This was my first time cooking pasta in an Instant Pot and I took the writer’s instructions in good faith. Unfortunately, I should have taken some time to dig into the community comments and reviews which accurately reported that the recipe produces undercooked penne. There’s a five-star rating system available as well, but at 3.6 stars, there weren’t any alarm bells going off initially. I was able to salvage the meal with some extra water in the casserole pan and a longer cook time in the oven. The only collateral damage ended up being a few burned noodles on top and a scramble for the smoke detector. The rest of the penne was chewier than I would have liked but better that than crunchy.

There’s a lot of leaning on the community to provide quality recipes.

As far as the recipes go, there’s a lot of leaning on the community to both provide quality instructions and give checks and balances when they don’t work out. Popular recipes will have enough community momentum for that to work, but niche recipes will have novices like me rolling the dice fairly often. That said, you’re likely to encounter the same uncertainties no matter where you look for recipes on the web, or how you end up sending those instructions to your appliances. Even if the recipe discovery ultimately fails you and the convenience of one-touch instructions is lost, at the very least you’ll have remote monitoring of whatever you input manually. In the best-case scenario, you’ll find a handful of recipes you love in Instant Pot’s database, and can reliably make use of the one-touch feature.

What else is new?

My last Instant Pot was the Ultra 6-quart, so the Pro Plus has been a big step up in a lot of ways. The inclusion of handles on the inner pot is a huge usability upgrade. Added fins on the lid and some mounts along the base provide a home for a big clunky top that would otherwise be rolling around the kitchen counter while you’re trying to put ingredients in. The front face has a touchscreen, which can be a lot easier to use for navigation than just a clicky wheel. An extra cover on the pressure release helps dissipate steam, not that I ever had many issues with damage from releases. There’s also a new pulse release mode that aims to reduce splatter when releasing pressure from soupier dishes.

Being able to cook so many things without needing to fire up the stove and ultimately save on energy usage is a huge pull. Discovering new recipes and beaming their instructions to the Instant Pot directly from your phone is a fun gimmick, but not without its trade-offs.

I used the Instant Pot Ultra for about three and a half years without any signs of it slowing down or wearing out. Out of the box, Instant Pots include a one-year warranty to cover any mishaps early in its life. The sealing ring on the inside is likely to be the first thing to go, but you can buy replacements for those without any issue. We suspect an Instant Pot could make it to five years and beyond with a little care.

The Instant Pot Pro Plus is easy to recommend. It continues to iterate on what has made the brand so successful. The amount of utility garnered from the feature set remains as impressive as ever.

Topics
9 ways Google Assistant can help with Thanksgiving
Best Prime Day Instant Pot Deals for October 2022
Roku gets into the smart home business with Wyze and Walmart
The best Instant Pots for 2022
Apple finally activates HomePod Mini’s hidden temperature/humidity sensor
The best smart thermostats for 2023
Best Smart Plugs: What is a smart plug, and which do I need?
The best outdoor smart plugs for 2023
This Shark cordless vacuum is under $150 — who needs Dyson?
Apple HomePod vs. Apple HomePod 2023
Apple HomePod Mini vs. Apple HomePod
The best robotic lawn mowers for 2023
Blink Wired Floodlight Camera offers heaps of features and an affordable price tag