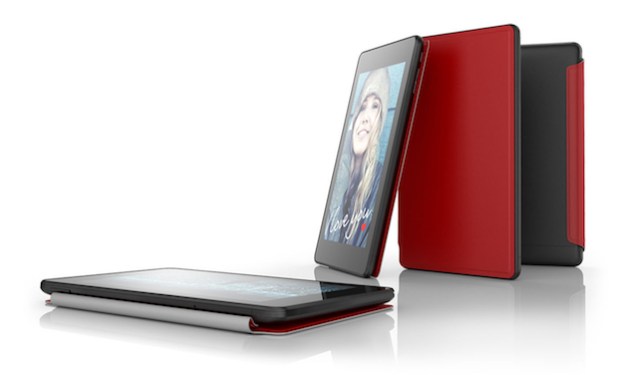 Alcatel has been busy this CES, unveiling the super thin One Touch Idol Ultra, the lightweight One Touch Idol, the big-screen One Touch Scribe HD and the One Touch Authority for the Cricket network. It’s not done yet either, as it has announced several new tablets to join its growing smartphone range.

The first, and certainly the most interesting of Alcatel’s tablets is the One Touch Evo 7 HD. As the name suggests, it has a 7-inch screen with a high definition 1280 x 800 pixel resolution, which is powered by a 1.6GHz dual-core processor and 1GB of RAM. Google Android 4.1 Jelly Bean is its operating system, there’s 4GB of internal storage plus a microSD card slot and a 3-megapixel camera.

So far, so ordinary, but what makes the Evo 7 HD unusual is the chance to upgrade the device in the future by adding in a removable module which provides 3G or 4G LTE connectivity. Sounds like a good idea, as sometimes our needs change, but Alcatel hasn’t been all that clear about its pricing. A Wi-Fi only version of the Evo 7 HD has been priced at $179, then the 3G version at $249 and finally, the 4G version will cost $350. Sadly though, there isn’t any mention of how much the module will cost separately, so it’s impossible to judge whether fiddling about with one makes sense.

The Evo 7 HD has been joined by the Evo 7, a more basic 7-inch Android tablet with 4.0 Ice Cream Sandwich installed, a 1GHz processor, 1GB of RAM, and a weedy 1024 x 600 pixel resolution. It’s also going to be available with a 3G module, at least in the UK, but again, Alcatel hasn’t provided any costs, not even for the tablet this time.

Along with the pair of One Touch Evo tablets, Alcatel has introduced three One Touch Tab tablets: the Tab 7, Tab 7 HD and the Tab 8. None of these have the option of adding the 3G or 4G connectivity modules at a later date, so you’ll be stuck with them or forced to upgrade if the feature suddenly becomes a priority.

The Tab 7 is essentially the same as the Evo 7, with a 1GHz processor and a 1024 x 600 pixel 7-inch display, although Alcatel says it’s slightly thinner and lighter – presumably due to the lack of cellular connectivity. The Tab 7 HD has a 7-inch, 1280 x 800 pixel resolution touchscreen, plus a 2-megapixel camera, Android 4.1 and a 1.6GHz dual-core processor.

Finally, the Tab 8 has an 8-inch screen with a 1024 x 768 pixel resolution, but is otherwise the same as the Tab 7 HD. Alcatel has given the Tab 8 a $180 price tag, while the Tab 7 HD will cost $150. The simple Tab 7 is currently without a price tag. All Alcatel’s new tablets will be accompanied by a range of accessories including a Smart Cover-like clip on case which protects the screen, then folds back to form a stand.

As for when they’ll be available, both the U.S. and the UK press releases are quiet on the subject, however CNet indicates anyone interested will have to wait until July at the earliest for them to go on sale in America.