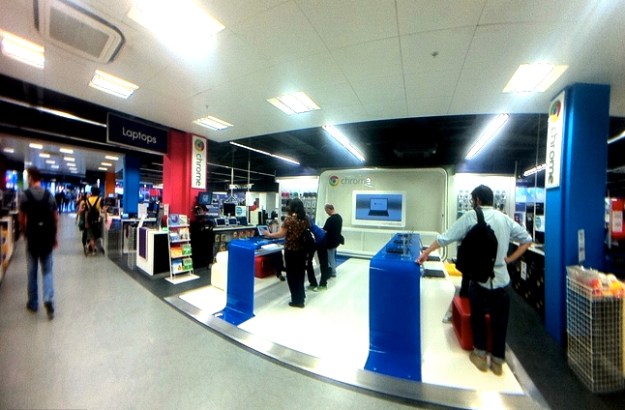 With its Chrome laptop computers and, more recently, Nexus tablets, many have wondered why Google hasn’t followed Apple, Microsoft and others in opening a chain of retail stores showcasing its products.

According to a 9to5Google report over the weekend, it seems the Mountain View company may actually be gearing up to open some brick-and-mortar locations. Sources described as “extremely reliable” (so not your usual, plain old “reliable”, then) told the website the company is “in the process of building stand-alone retail stores in the US and hopes to have the first flagship Google Stores open for the holidays in major metropolitan areas.”

The company is apparently keen to give consumers the chance to go hands-on with its range of products, especially with the expected launch of Google Glass possibly some time next year.

Executives at the company reportedly feel that with a new product like this, it’s essential consumers have a chance to try it out for themselves to better appreciate its capabilities. 9to5Google compares the situation to when Apple introduced the iPad, with Tim Cook recently telling analysts that the Cupertino company’s retail stores were key to the tablet’s success.

“I don’t think we would have been nearly as successful with iPad if it weren’t for our stores,” Cook said. “It gives Apple an incredible competitive advantage. Others have found out it’s not so easy to replicate. We’re going to continue to invest like crazy. The average store last year was over 50 million in revenue.”

As for Google, it’s not totally new to the idea of operating retail stores – it’s actually been dabbling in the field for some time with a number of store-within-a-store set-ups, beginning with the Chrome Zone that opened inside a PC World store in central London in late 2011. In the US, some Best Buy stores are hosting Chrome Zones too. Staffed by Google-trained employees, the stores enable the company to better communicate information about its products and services while giving consumers an opportunity to get hands-on with its tech offerings.

9to5Google’s report also suggests the company could sell its Google-branded merchandise in the new stores, though the source (the extremely reliable one) hadn’t actually mentioned this possibility.

And imagine – if the locations were large enough, Google might even be able to squeeze in one of its self-driving cars. While it’s unlikely it would be seen trundling around the shop floor, it could nevertheless be a focal point for visitors to the store, giving employees the chance to explain more about the technology, as well as about other projects and initiatives being undertaken by the company.