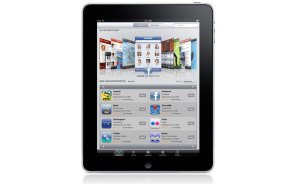 Apple changed the world of cellular phones with its iPhone in 2007, and then did the same for the personal computing landscape in 2010 with the iPad tablet. Smartphones and tablet PCs existed before these devices were released, but the widespread embrace of both has led to a boom time for the mobile tech industry. It’s surprising then that Apple’s iPad hitting the 100,000 app milestone in the App Store isn’t being trumped as the achievement that it is.

Word of the 100,000 marker being crossed comes from macstories, which noticed the figure in the same app listing that you or I can look at anytime simply by firing up the App Store on a nearby iPad. At the time of the original writing, the official count was at 100,161 (we’re now up to 100,740). It’s an impressive statistic when you consider that the iPad launched a little more than a year ago (April 3, 2010).

The figure includes both iPad-specific apps and those that are available as “universal” downloads, compatible with both iPad and iPhone. Perhaps that’s the reason Apple isn’t making any sort of noise about the achievement. Still, bravo to the iPad and the App Store for filling our lives with apps that can do everything from publishing blog posts to posing as lightsabers.

Video-editing app LumaFusion to get a Galaxy Tab S8 launch
This Samsung tablet is $109 today, but it won’t last long
My 1TB iPhone 14 Pro isn’t overkill — it’s the right version to buy
Best Phone Deals: Save on Google Pixel 6a, Galaxy S22 Ultra
Latest iPad is $50 off, with delivery in time for the holidays
Save $70 on the Fitbit Versa 4 when you buy it today
My favorite phone of 2022 didn’t come out this year — it’s from 2021
Twitter’s downfall made me look for alternatives, but they just made it worse
Apple Music Sing brings karaoke singalongs to iPhones, Apple TV
How to buy over-the-counter hearing aids
Why the lawsuit against Apple’s AirTags may be bigger than you realize
Don’t miss this Apple Watch Ultra deal
Apple to use made-in-America chips for iPhones and Macs