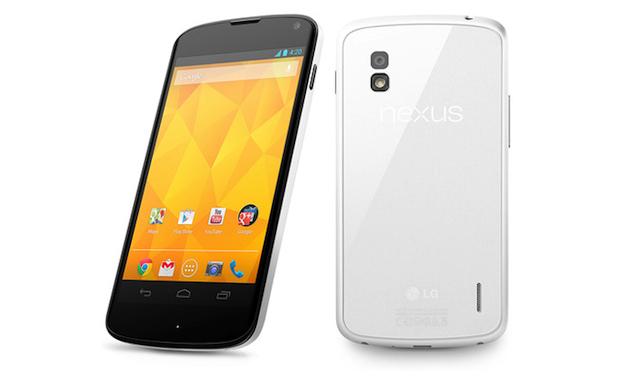 LG has announced the upcoming availability of the Nexus 4 smartphone in white, following a succession of more detailed leaks over the past few weeks. However, anyone hoping the phone would come with a few extra features (4G LTE, anyone?) is going to be very disappointed, as LG sums the white Nexus 4 up perfectly in its press release tag line, which reads, “Same popular smartphone, different color.”

That’s right, the white phone’s specification is the same as the black Nexus 4, which went on sale late last year. A reminder is probably in order though, so if you’re considering picking up the new white phone, here’s what you need to know. It has a 4.7-inch, IPS Plus touchscreen with a 1280 x 768 pixel resolution. A quad-core, 1.5GHz Snapdragon S4 processor with 2GB of RAM can be found inside.

The main camera has 8 megapixels, while the video call lens above the screen has 1.3 megapixels, and there’s a choice of either a pathetic 8GB of storage memory, or a slightly more acceptable 16GB. The reason you’ll want to buy the Nexus 4 though, is for its untouched version of the Android 4.2 Jelly Bean operating system. Nexus devices are always first to receive the latest version of Google’s OS, so when Android 4.3/Android 5.0 comes out, Nexus 4 owners should be enjoying it before anyone else. You can read our in-depth review of the Nexus 4 here, which of course, is still applicable to the new white phone.

LG will put the white Nexus 4 on sale in Hong Kong on May 29, with a promise North America, Europe, Asia and the Middle East will follow over the coming weeks, so we’ll need to keep an eye on the Google Play store in early June. The price hasn’t been confirmed, but there’s no reason why it should cost any more than the black Nexus 4, so you’ll need $299 spare to secure one.

Video-editing app LumaFusion to get a Galaxy Tab S8 launch
5 phones you absolutely shouldn’t buy on Black Friday
Cheap Galaxy Z Flip 4 deal means you can avoid making the same mistake as me
Google Pixel Watch just got a big discount -– save $50 for Black Friday
Google Pixel 7, Pixel 7 Pro just got price cuts for Black Friday
Latest iPad just got its first proper discount for Black Friday
I love the Oura Ring, but I’m increasingly worried about its future
Why GPS is critical to your smartphone — and desperately needs an overhaul
Kindle Black Friday deals just landed – save on Paperwhite and Oasis
Garmin watch Black Friday deals: Forerunner 45 and Vivoactive 4
How to block someone on WhatsApp messenger
Best stylus for tablets and computers: Top pens for note-takers and artists
Should you buy an iPad on Black Friday or wait for Cyber Monday?