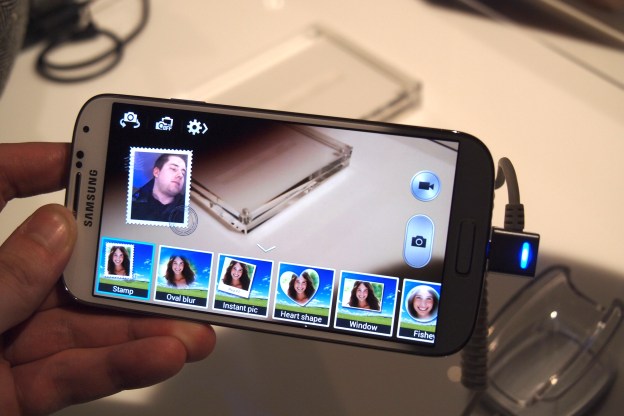 You know all the (hundreds) of new software features demonstrated at the Samsung Galaxy S4 launch event? Well, if they don’t need hardware specific to Samsung’s new Android smartphone to function, it’s highly probable Samsung will push them out to other compatible phones, such as the Galaxy S3 and Galaxy Note 2.

The news comes via PCMag and Samsung’s Vice President of Portfolio Planning, Nick DiCarlo, who said, “Anything that we can do that’s not dependent on hardware like Infrared, we’ll definitely bring to all the flagship devices.” This could mean another Premium Suite-style update will arrive in the future, carrying much what’s supposed to make the Galaxy S4 so special.

So what could it include? The ridiculously long list of new features makes going through them individually not only very time consuming, but a bit pointless, as we’ve discussed them elsewhere; so it’s best to examine what won’t make it over to Samsung’s other high-end devices. The first, and probably most obvious, is the WatchNow TV remote feature, as it needs the Infrared sensor to operate. The same goes for its barcode scanning feature, and quite possibly the Air View and Air Gesture hands-free control options too.

The S Health feature may also take a hit, as although it does depend on optional accessories, it also needs the pedometer, humidity, and temperature sensors inside the Galaxy S4, so if it does transfer to another phone it may be in a cut down version. Most other things are fair game though, including S Translator, Dual Camera, and the wealth of other camera-related additions.

Unsurprisingly, DiCarlo didn’t say when these features would turn up for the previous generation flagship phones, but judging by Samsung’s track record when it comes to Android updates, it’s unlikely to be later this week.