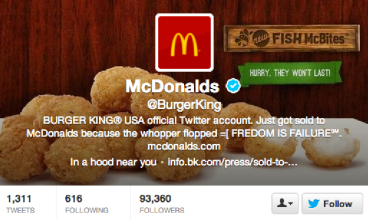 Burger King’s Twitter account is up and running again after an embarrassing episode on Monday where a hacker or hackers took control of the account and claimed – among many things – that Burger King had been acquired by McDonald’s “because the whopper flopped.”

After asking Twitter to suspend the account Monday afternoon, Burger King was able to get it back online in the evening.

Interestingly, its follower count, now at over 110,000, has increased by more than 30,000 since before the hacker took over the account and continues to climb. It’s not clear if @BurgerKing’s new followers are fast food fanatics hoping for some profound burger-based musings in 140 characters or less, or simply Twitter users curious to see if the mischievous hacker returns to create more havoc.

The fast food giant signaled its return to the microblogging service with the message, “Interesting day here at Burger King, but we’re back! Welcome to our new followers. Hope you all stick around!”

Commenting on the incident in a statement, Burger King spokesperson Bryson Thornton said, “Earlier today, our official BK Twitter Account was compromised by unauthorized users. Upon learning of this incident, our social media teams immediately began working with Twitter security administrators to suspend the compromised account until we could re-establish our brand’s official Twitter page.

“We apologize to our loyal fans and followers, whom might have received unauthorized tweets from our account. We are pleased to announce that the account is now active again.”

The hacker had control of Burger King’s Twitter feed for more than two hours, in which time it changed the name of the account to “McDonald’s” and added a profile picture showing the company’s iconic golden arches.

More than 50 tweets filled the timeline, with some containing obscenities and racial slurs, while others accused staff of, shall we say, less-than-desirable work practices.

On its Twitter feed, McDonald’s responded to the incident by saying it empathized with its Burger King counterparts, adding “Rest assured, we had nothing to do with the hacking.”

It’s still not clear precisely who, or what group, was behind the hack.

Twitter for web returns after major outage on Wednesday