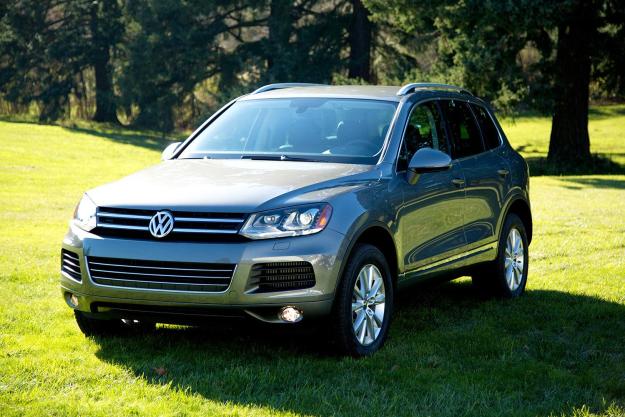 “The Volkswagen Touareg TDI isn’t the newest diesel-powered German luxury SUV on the market. It is, however, the best one for the money.”

Update 11-19-14: This review originally covered the 2014 model year of the Volkswagen Touareg. The 2015 Touareg is in showrooms now. Minor improvements were made to the body and interior of the vehicle. All changes are listed below.

One evening some years back, as I prepared for a Sunday evening date, I received a call from my father. He told me he got his tractor stuck in some mud out on his property and then ruined the transmission on his Subaru trying to free the stuck beast.

He asked me if I knew anyone who could come help tow the vehicles out. At the time, I owned a Range Rover Classic, which I felt was an invincible all-terrain machine, so I scoffed at him.

I eagerly raced the 45 minutes over to his house out in West Linn, Oregon to show him what my Rangie was made of.

Without first surveying the situation, I drove down into the soggy field, hooked up a tow strap and gunned it. Tires spun, mud flew, and the tractor moved a bit. But a matter of moments, my Range Rover, too, was stuck.

Not wanting to be outdone by a seemingly simple task, I did what every young city slicker would do. I put the transfer case into low range, lowered the window, leaned out, and gunned it. Now not only was my truck stuck axles-deep in the mud, my fancy date-night clothes were splattered with muck.

I won’t bore you with the details, but eventually we got the three vehicles out of the swamp (it involved a Toyota). I swore, though, that one day I would traverse that forsaken patch of mud. I just didn’t know which vehicle would do it.

A Touareg by any other name …

The Touareg is an interesting vehicle to me.

It’s been out for around a decade now. It’s in its second generation, but has only received minor updates. While it’s certainly better looking than it was a decade ago, it’s not that different.

The Touareg seems to be one of those unsung heroes of the automotive world.

Don’t write to me citing niggling differences, OK? It’s really not that different than it was 10 years ago.

The Touareg seems to be one of those unsung heroes of the automotive world, like the Volvo XC90. Volkswagen got the Touareg mostly right the first time and hasn’t done much to it since.

Never a huge fan of the Touareg, especially compared to the competition, I did rather fancy one derivation of the Touareg line over the last 10 years. That was the first diesel offering: The 5.0-liter V10 TDI that made some 309 horsepower and 553 pound-feet of torque.

After a few short years, that rock-crushing V10 was eventually replaced by the much more miserly and controllable 3.0-liter turbocharged V6 TDI that powered the Touareg I drove this week. It, by comparison, makes 240 hp and 406 lb-ft. of torque. Yes, it might not be as powerful, but it’s far more efficient and much more eco-friendly than the last diesel.

The V6 TDI, mated to an eight-speed automatic transmission, is rated at 20 mpg city, 29 mpg highway, with a combined score of 23, which are pretty good numbers considering the Touareg is a sizable four-wheel drive luxury SUV.

This, I’m afraid, is where the exciting specs – and kit – on the Touareg end. It has navigation, some seats, and not a single bad angle on the exterior.

You might throw your hands in the air and wonder why to care at all, then. You’re right to be frustrated. But that understated class is sort of the point of the Touareg.

I just went through a long kick of German diesel products. And I won’t debase the other automakers by mentioning them in this story. Suffice it to say, they’re major ones.

The Volkswagen Touareg TDI Sport might just be the least pretentious diesel-powered German SUV on the market in America right now.

The Volkswagen Touareg TDI Sport might just be the least pretentious diesel-powered German SUV on the market in America right now. If you think for a moment and consider what vehicles fall into that segment, you might quickly agree.

It’s great to look at, great to ride around in, and, thankfully, not at all embarrassing to be seen in. And although the Touareg TDI lacks pretention, it delightfully doesn’t also lack the refinement or self-assurance that usually comes with pomposity. It is just as smooth and luxurious as any of its Teutonic mates.

From the driver’s seat, the Touareg hits all the marks. You can barely hear the engine, which is a good thing in a diesel. Trust me. The infotainment system is well laid out. The interior isn’t cheap looking, as it once was. The seats are comfy. The interior is roomy. The brakes are responsive. And the electronic power steering has the best feel of any in its class.

Isn’t this sort of the reason Germans make cars anyway? At least, isn’t it the reason they make grey family haulers, so that you don’t look like a shout-y philistine?

As dour as the other German luxury diesel options on the road are, they still rub onlookers the wrong way. They still make you look like you want to be seen. The Touareg doesn’t.

It has the same accouterments as the other brands but with a badge you don’t have to cover up with a towel when you go to a football game, for fear of being snickered at.

I’ll admit the acceleration in the Touareg TDI isn’t great, especially compared with other German diesel SUVs. Though, only people who collect state-themed spoons also buy Volkswagen TDIs for the performance figures. So there’s that.

Tooling around in the Touareg TDI last weekend, I wondered where I wanted to snap photos of the Volkswagen. Realizing I was out in the country near my father’s property, I hung a left and aimed for his place.

I wondered if I was making a mistake as I left the gravel road, turned the all-wheel drive system knob from ‘road’ to ‘off-road’ and throttled into the field. I heading right toward the problem patch, the land that had disabled a Subaru, sunk a tractor, and emasculated my Rangie.

Admittedly, the spot does make for the best photographs on the property. While I did want the best possible pictures, I also secretly hoped to challenge the Touareg and give it a bit of an all-terrain fight.

I found a good spot. Put the rig into Park and hopped out onto the soggy grass with a giggle. I stepped back, snapped some pictures, and watched as the Touareg sunk slowly into the earth.

“This should test those street tires!” I exclaimed to no one.

After a few minutes of photo taking and jawing with the neighbor, I hopped back into the Touareg and hit the gas. It throttled up but didn’t do anything. “Oh here we go…” I said out loud to the empty cabin. Then, suddenly, the tires started moving with as much traction as on the pavement and we, the Touareg and I, quickly climbed up the hill to the house.

I pulled a U-turn and headed back to the muck. Again, the Touareg hit the slop, I hit the throttle, it thought for a second, and off it went. After many, many tries without one single hiccup, I eventually gave up and went home.

On the way, though, I pondered the Touareg. At $51,945, it wasn’t cheap. But by German luxury diesel SUV standards, it was good value. Thinking about it further, I realized that, all things considered, the Touareg TDI Sport just might be the German diesel SUV that I’d buy above all else. So there’s that.

How much does it cost to charge an electric car?
Business upfront, 31-inch TV in the back. BMW’s electric i7 is a screening room on wheels
Ford and VW close down Argo AI autonomous car unit
GMC poured all of its truck-making expertise into the Sierra EV pickup
Nvidia’s Drive Concierge will fill your car with screens
The Uber hack is an outrageous tale of a teen hacking for fun
Tesla to fix window software on 1M of its U.S. cars
Lux and refreshingly livable, Mercedes’ EQE moves EVs mainstream
How to watch Tesla’s AI Day tonight and what to expect
2023 Audi Q4 E-Tron first drive: the predictable and traditional EV SUV we need
We need more 7-passenger EVs, but the 2023 Mercedes EQS SUV has room to improve
Tesla AI Day 2022: Optimus, self driving cars, and everything else announced
Tesla hopes full self-driving beta will be out globally by the end of 2022