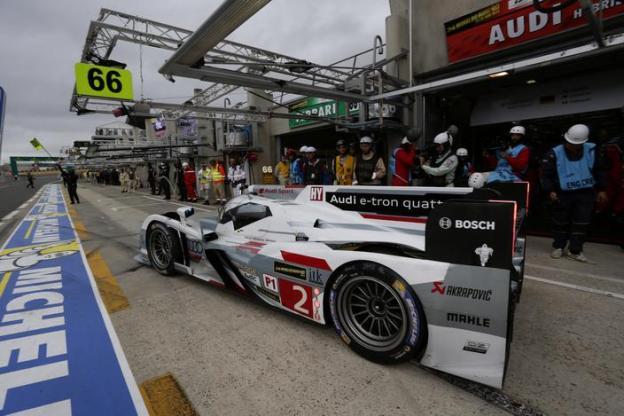 Despite some criticism over recent news that Audi will not launch an all-electric consumer model of its popular Audi R8 sports car, the carmaker continues to gain ground with its electric vehicle technology.

This past weekend, Audi posted its second win in the 24 Hours of Le Mans in its Audi R18 e-tron quattro.

Even more impressive, the Audi drivers, which included Loïc Duval, Tom Kristensen and Allan McNish, pulled off the fete in the hybrid racecar after an unexpected change in regulations and in horrible weather conditions.

When faced with the short notice changes, the three Audi R18 e-tron quattro cars on average were able to go two laps farther on one tank filling than their main rival Toyota, according to an official Audi press release.

The win marks the twelfth triumph for the four rings at Le Mans, which was heavily overshadowed by the death of Danish driver Allan Simonsen in Saturday’s race.

The three Audi R18 e-tron quattro cars, which are equipped with an electrically driven front axle, were the fastest vehicles in the field throughout the entire race – as well as the most efficient ones, according to the company’s official press release.

Other key technology features included innovative radiators and matrix-beam LED headlights, which make optimum lighting of the corners at night possible, which is considered a crucial advantage at Le Mans.

“We owe the twelfth victory of our brand at Le Mans to the consistent, innovative spirit of our engineers, the unconditional commitment of the entire team and the skills and strong nerves of our drivers,” said Rupert Stadler, Chairman of the Board of Management of AUDI AG, who, as usual, personally watched the race on location. “This marks another great success for Audi in which our hybrid system again prevailed and new technologies, which our customers will also benefit from in the future, were tested.”

Here’s hoping that one day some of  that “innovative spirit” that Stadler speaks about is used to recharge plans for launching that all-electric R8.

Lamborghini brings back a legendary supercar as an 803-hp hybrid

The best SUVs for families