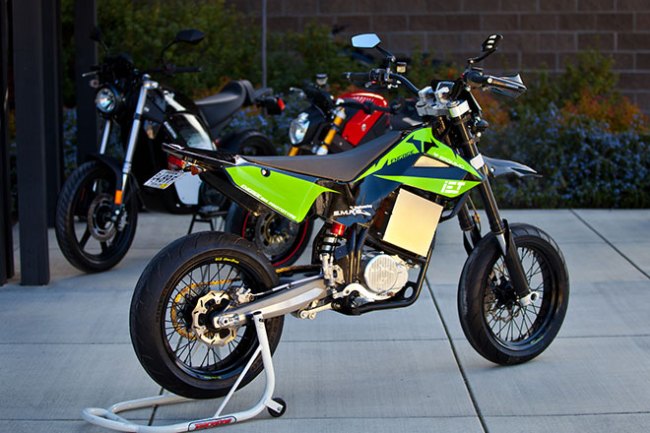 The world of electric motorcycles just got a much-needed boost. Electric bike manufacturer Brammo announced today the release of a new line of dirt bikes that sport 6-speed transmissions, an industry first.

Before now, electric motorcycle makers have had to choose either quick acceleration or a zippy top speed — they couldn’t have both. With the added gearbox on the new Engage and Encite all-electric dirt bikes, Brammo boasts that riders can take advantage of the massive go-power torque of the electric engine without sacrificing the pants-soiling top speed many riders expect from their personal two-wheeled rocket ships.

The Engage comes in three versions: An all-dirt model, the Engage MX, for off-road-only riding; the Engage SMR, a super moto offering that’s made for racing on and off road; and the Engage SMS, which comes with all the lights and signals needed for legal on-road cruising. Brammo is asking $9,995 for both the Engage MX and SMR versions, and $11,995 for the street-legal Engage SMS. Another model, the Entice MMX Pro, is also in production, but no price has been released for this mini dirt bike, which is made strictly for racing.

The technology for the bikes’ 6-speed transmission comes from Italian firm SMRE, which has made an exclusive deal with Brammo for its patented Integrated Electric Transmission (IET).

“We are delighted to have Brammo as our strategic partner.” said Samuele Mazzini, founder and CEO of SMRE and creator of the IET, in a statement. “This alliance will see the IET integrated into Brammo motorcycles and enjoyed by riders all around the world.”

In addition to the added gearbox, then Engage and Entice models represent Brammo’s foray into the world of off-road machines. Before the release of these bike, Brammo’s offerings included the relatively tame Enertia and Enertia Plus, and the sporty Empulse, street-only bikes that all deliver power directly from the electric engine to the wheels, without first running through a transmission.

Brammo hasn’t yet offered many details on the bikes, like, for instance, how much they weigh. But the company says that they’ll run on the street for roughly 60 to 80 miles on a single charge, or about 30 minutes on the track. And the batteries take about two to three hours to recharge.

To prove that their bikes can hang with the standard gas guzzlers, Brammo is in Las Vegas this week to race their new bike along side the Honda, Yamaha and KTM models in the big MiniMotoSX race. So if any of you bike fans are around Vegas on Friday, be sure to check out Brammo’s latest creation.