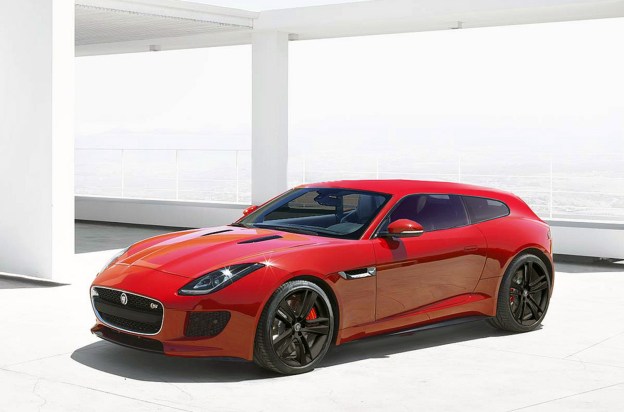 Digital Trends contributor Nick Jaynes, while in Spain looking over the latest from Jaguar, says an engineer there may have unintentionally confirmed a “shooting-brake” version of the sporty new F-Type is in the works. And there may be more model variations on the way.

A “shooting brake” configuration adds a more practical wagon-esque rear section to a car, although, like the Jaguar pictured above, it typically retains just the two doors and sporting underpinnings of the base version (below). Whether it would have a third rear door of some sort is unknown.

On Wednesday, Jaynes asked about the possibility of any new vehicles being based on the new F-Type platform and an as-yet unnamed engineer said “Oh yeah, definitely. Like the shooting brake.” A PR person nearby was clearly unhappy the engineer made the remarks, Jaynes said.

A quick search of the interwebs turned up the above rendering by car and sneaker designer Garrett Bradford. When the image was shown to Jaguar officials after the slip of the tongue, Jaynes said they were “shocked.”

Jaynes also said the engineer told him the company has plug-in hybrid diesel technology and it could very well be coming in the future. But the engineer also said he believes China will be the primary catalyst in determining future drivetrain technologies.

The convertible F-Type was first announced at the New York Auto Show in April of 2012; Jaguar says it is a modern sports car that carries on the legacies of cars like the E-Type and XK120. At the time, no mention of another version was made.

At the 2012 Beijing Motor Show, Jaguar elaborated on its plans, saying that the F-Type would be offered with three engine options. Buyers will choose from the 3.0-liter supercharged V6 from the XF and XJ sedans, with either 335 hp and lb-ft of torque, or 375 hp and 339 lb-ft, and a 5.0-liter V8 with at least 500 hp.

(Stephen Edelstein contributed to this report. Many thanks to Garrett Bradford for the use of his rendering.)