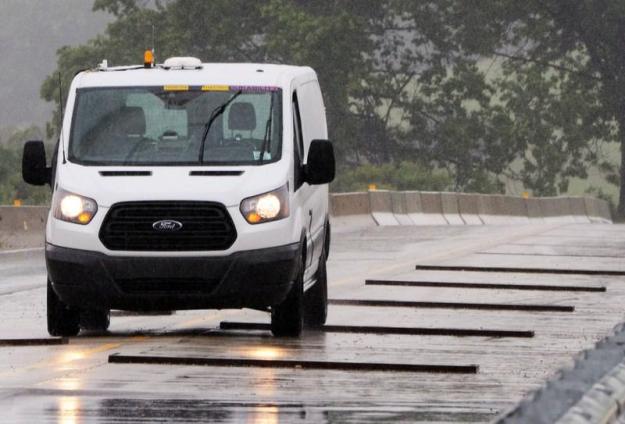 Ford engineers have developed an industry-first robotic test driving program that will likely give the automaker even more clout on the road.

The technology, being used at Ford’s Michigan Proving Grounds in Romeo, Mich., features a robotic control module installed in a test vehicle that controls vehicle steering, acceleration and braking , according to a Ford press release.

Riding on the motto “Built Ford Tough,” the module follows a preprogrammed course as the vehicle’s position is tracked by cameras in a central control room with a GPS system able to pinpoint the location down to plus or minus an inch.

If the vehicle happens to steer off course, engineers can get it back on track from the control room and restart the test if necessary. The high-tech system also features onboard sensors capable of stopping the test vehicle if a pedestrian or another vehicle happen to accidentally wind up in its path.

The robotically driven vehicles enable Ford to conduct durability tests on surfaces ranging from broken concrete to oversized speed bumps in a few hundred yards, a process that previously would have taken 10 years to complete.

In years past, this kind of vehicle testing would have been substantially limited by the restrictions placed on human drivers to endure the rigorous driving on a daily basis.

The pilot program was most recently used for testing the durability of Ford’s new Transit van, which launches in 2014.

Ford said that in addition to reducing the strain put on human drivers, the robotic system also enables the carmaker to accelerate the development time for a vehicle while substantially improving overall quality.

“Some of the tests we do on our commercial trucks for North America are so strenuous that we limit the exposure time for human drivers,” says Dave Payne, manager, vehicle development operations, in an official press release. “The challenge is completing testing to meet vehicle development time lines while keeping our drivers comfortable.”

Mel Torrie, CEO of Autonomous Solutions Inc., says the technology could also be used to help improve vehicle automation in other areas such as mining, agriculture and the U.S. military.