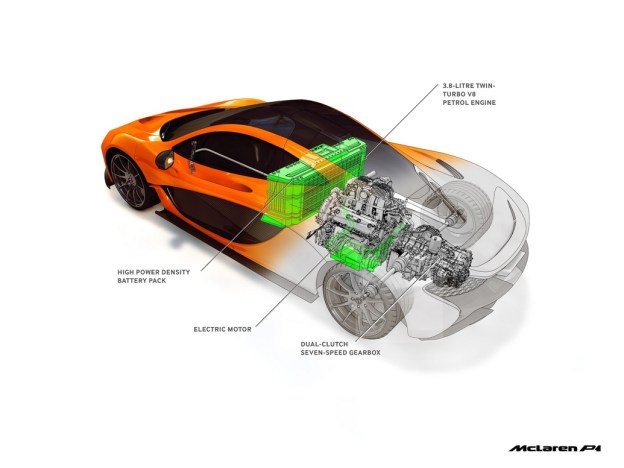 McLaren is going green with its P1, the successor to the legendary F1 supercar. The P1 was shown in concept form at the Paris Motor Show last fall, but the full productiion version won’t be revealed until the Geneva Motor Show opens in a few weeks. Luckily, McLaren is keeping us sated with some technical details, including the revelation that this ultimate driver’s car will be a hybrid.

Under the P1’s radical bodywork will be a twin-turbocharged 3.8-liter V8 with 727 horsepower and 531 pound-feet of torque. Coupled to that will be an electric motor with 176 hp and 192 lb-ft.

That puts total system output at 903 hp and 723 lb-ft, all sent to the rear wheels via a seven-speed dual-clutch automatic transmission.

The V8 is based on the engine from McLaren’s smaller MP4-12C, but features necessary reinforcements to handle the extra power. The block is also shaped differently to accommodate the electric motor.

That motor is produced by McLaren Automotive’s sister division, McLaren Electronics. At high speeds, McLaren’s IPAS  (Instant Power Assist System) uses it as a booster, delivering an on-demand burst of 176 hp, as well as sharper throttle response that, the carmaker says, simulates that of a naturally aspirated gasoline engine.

You may be noticing a theme here: McLaren designed the P1’s V8 and electric motor to work together, creating one incredibly flexible powertrain.

The electric motor can also drive the P1 for short distances. It uses regenerative braking, activated when the driver lifts off the throttle, to recharged its battery pack.

The P1 joins a grow cohort of potentially world-beating hybrid supercars. Also debuting at Geneva is the Ferrari F150, which is expected to use an electric motor teamed with the Italian company’s V12 to produce at least 800 hp. In September, customers will take delivery of their Porsche 918 Spyders, with 780 hp apiece.

We’ll see how the McLaren stacks up against Ferrari and Porsche’s best when it officially debuts at the Geneva Motor Show in early March.