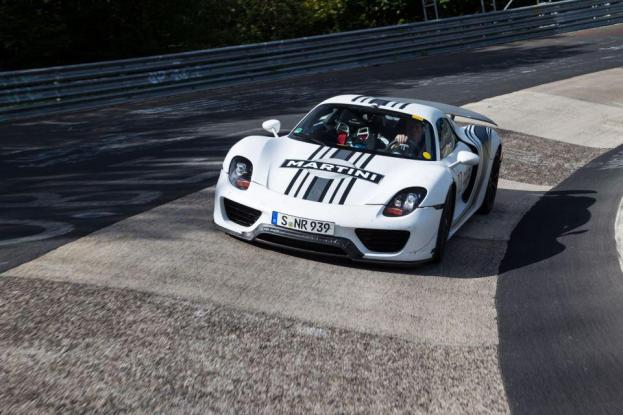 When the Porsche 918 Spyder debuted as a concept at the 2010 Geneva Motor Show, it seemed like the ultimate car: a plug-in hybrid Porsche supercar. However, it’s not the only hybrid supercar on the block anymore.

The Ferrari LaFerrari and McLaren P1 surely gave Porsche’s engineers pause, so with the car’s September 18, 2013 delivery date fast approaching, they made a few modifications.

Porsche boosted the 918’s total system output (the sum of its gasoline engine and electric motors) from 795 horsepower to 887 hp, along with a spacetime-warping 950 pound-feet of torque.

That total system output is still less than the P1’s 903 hp and the LaFerrari’s 951 hp, but at least Porsche has closed the gap a bit. With all three cars within spitting distance of 1,000 hp, what’s a couple of hundred horses anyway?

They will make a difference on the track, though.

These numbers confirm what we already knew: that the 918 Spyder will give its British and Italian rivals a run for their money.

McLaren says the P1 will do 0 to 62 mph in 3.0 seconds flat, and its top speed is electronically limited to 217 mph. Ferrari isn’t offering any hard numbers for the LaFerrari, but it is expected to do 0 to 60 mph in under 3.0 seconds and eclipse 200 mph.

The three-way drag race might be a near tie, but the 918 has also proven itself in the corners. The Porsche’s Nürburgring lap time has dropped below the previously quoted 7:14, although Porsche isn’t saying by how much. McLaren and Ferrari haven’t released Nürburgring lap times for their cars.

Unlike its rivals, the 918 is also expected to be a true green machine, albeit a spendy one. It has a 20-mile electric-only range, and Porsche says it will returned 86.5 mpg combined on the European cycle. That’s probably a bit optimistic, especially considering how most people will drive this supercar, but that’s still impressive fuel economy considering the tremendous amount of power available.

Porsche will only build 918 copies of this ultimate hybrid, which should all be in customer hands by the end of the year. Each buyer paid $845,000 for the privilege of owning one.

How do you think the 918 Spyder stacks up against the McLaren P1 and Ferrari LaFerrari? Tell us in the comments.

The McLaren Speedtail is a 250-mph, 1,000-hp work of art on wheels
McLaren is testing an electric car, but a production version is a long way off
This mint condition McLaren F1 belongs in a museum, but it could be yours
Final Ferrari LaFerrari hybrid supercar sells for $9.9 million at auction
Tesla recalls 130,000 U.S. vehicles over touchscreen safety issue
Mercedes issues urgent do-not-drive recall for 292,000 SUVs
Bluetooth hack compromises Teslas, digital locks, and more
EV glossary: All of the electric vehicle jargon you need to know
How do electric cars work? EV motors and batteries explained
SpaceX announces Starlink for RVs, with no wait for dishes
Waze finally adds Apple Music to its audio player
Insta360 cameras take a speedy ride around Monaco’s F1 track
Buick announces plan to go all-electric with stunning EV concept