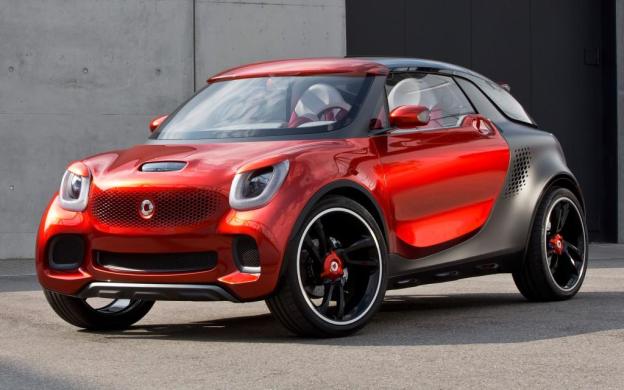 Carmakers are striving to associate their products with versatile gadgets like smart phones and tablets, which might explain why Smart’s latest concept, the forstars, doubles as a movie projector.

In fact, Smart says the DLP projector mounted in the forstar’s hood “enables the work of film stars to be spontaneously shared with friends at any time.” Having said friends gather around an iPad seems easier than buying an entire car for the same purpose, but that’s why this Smart is just a concept.

Fittingly, the projector connects to a smart phone via Bluetooth. The driver can also mount their phone on the dashboard and connect to a bumper-mounted camera, creating a somewhat Rube Goldbergian alternative to the rearview mirror.

Creative uses of tech aside, the forstars previews a possible new addition to the Smart lineup. The concept is billed as a “Sport Utility Coupe,” or SUC (Smart’s marketing department might want to rethink that one), combining the tiny proportions of a normal Smart with the big wheels and raised driving position of an SUV.

The result is a mixed bag. On the positive side, the longer wheelbase and lower roofline definitely help make the forstars look less toy-like, while the matte black outline of Smart’s trademark Tridon safety cell ties the concept to existing Smart cars.

On the other hand, the LED headlights with “eyebrow” covers look a little dopey, as does the as does the concave shape of the front end. The ventilation holes in the front end and rear fenders make the forstars look like part of a home stereo system.

The forstars is powered by a 60 kW electric motor developed by Mercedes tuner Brabus; it’s similar to the motor used in the electric Smart fortwo ED. As with all Smart cars, the motor is mounted in the back.

Smart says the forstars’ top speed is a barely-adequate 80 mph. Drivers might be better off leaving it in their garage and watching movies, rather than risking any sustained highway driving.

Of the forstars’ three main elements (movie projector, styling, electric powertrain) the most likely to see production is the “SUC” body. A bigger vehicle is a logical next step for Smart, whose cars are really too small to be practical for most Americans.

A production Smart SUV could compete against the Mini Countryman, Nissan Juke, and the upcoming Fiat 500L. Smart also showed the for-us, a pickup concept, at the 2012 Detroit auto show, so the company seems to be thinking big.